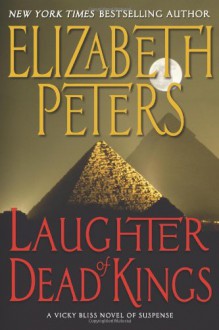 The Laughter of Dead Kings
by: Elizabeth Peters (author)

Who stole one of Egypt's most priceless treasures? That is the question that haunts the authorities after a distinguished British gentleman with an upper-crust accent cons his way past a security guard and escapes into the desert carrying a world-famous, one-of-a-kind historic relic. But the Egyptian authorities and Interpol believe they know the identity of the culprit. The brazen crime bears all the earmarks of the work of one "Sir John Smythe," the suave and dangerously charming international art thief who is, in fact, John Tregarth, the longtime significant other of Vicky Bliss. But John swears he is retired - not to mention innocent - and he vows to clear his name by hunting down the true criminal.

Vicky's faith in her man's integrity leaves her no choice but to take a hiatus from her position at a leading Munich museum and set out for the Middle East. Vicky's employer, the eminent Herr Doktor Anton Z. Schmidt, rotund gourmand and insatiable adventurer, decides to join the entourage.

But dark days and myriad dangers await them in this land of intriguing antiquity. Each uncovered clue seems to raise even more questions for the intrepid Vicky - the most troubling being, Where is John going during his increasingly frequent and unexplained absences? And the stakes are elevated considerably when a ransom note arrives accompanied by a grisly memento intended to speed up negotiations - because now it appears that murder most foul has been added to the equation.
show less
Format: hardcover
ISBN: 9780061246241 (0061246247)
ASIN: 61246247
Publish date: 19-08-2008
Publisher: Harper Collins
Pages no: 324
Edition language: English
Category:
Adventure, Cultural, Mystery, Egypt
Series: Vicky Bliss (#6)

7 years ago
http://empressreece.booklikes.com Hooked on Books 5.0 The Laughter of Dead Kings
text The Laughter of Dead Kings
Today is a sad day Im so bummed this was the last book in the series! Im going to miss John & Vicky & Schmidt! I felt like I knew them so well & If i didnt know better, the stories were real & they are too. Lol going to try the other Peters series & hope it compares to this one!
See review

8 years ago
http://cplesley.booklikes.com C. P. Lesley 5.0
text
I so wanted this book to appear, bought it in hardcover the day of its release, read it right away—and was a bit disappointed. The bloom was off the series rose, I thought.I was wrong. Re-reading it now, after the author's death last year, I realize she was saying goodbye to a set of well-loved char...
See review

10 years ago
http://AmySea.booklikes.com AmySea 0.0
text
It's been awhile since I've read a Vicky Bliss novel, so I just couldn't get into this one. I seem to have forgotten the characters' histories and the exact nature of their relationships, but also, the dialogue seemed unnatural to me. This just didn't capture my interest; maybe if I reread the oth...
See review

10 years ago
http://helenliz.booklikes.com helenliz 1.0 Laughter of Dead Kings (Vicky Bliss, No. 6)
text Laughter of Dead Kings (Vicky Bliss, No. 6)
June's reading group book. Not sure I'll bother again. Mildly entertaining - a museum type (it's never made exactly clear what she does) gets embroiled in the stealing of King Tut's mummy. Yup, it's that outlandish. She sort of solves it, assisted by an antiques dealer who used to the an antiques th...
See review