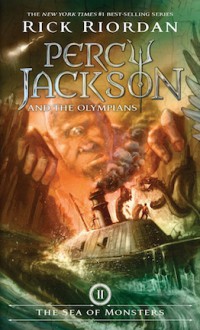 The Sea of Monsters
by: Rick Riordan (author)

But things don't stay quiet for long. Percy soon discovers there is trouble at Camp Half-Blood: The magical borders which protect Half-Blood Hill have been poisoned by a mysterious enemy, and the only safe haven for demigods is on the verge of being overrun by mythological monsters. To save the camp, Percy needs the help of his best friend, Grover, who has been taken prisoner by the Cyclops Polyphemus on an island somewhere in the Sea of Monsters--the dangerous waters Greek heroes have sailed for millenia--only today, the Sea of Monsters goes by a new name...the Bermuda Triangle.

Now Percy and his friends--Grover, Annabeth, and Tyson--must retrieve the Golden Fleece from the Island of the Cyclopes by the end of the summer or Camp Half-Blood will be destroyed. But first, Percy will learn a stunning new secret about his family--one that makes him question whether being claimed as Poseidon's son is an honor or simply a cruel joke.
show less
Format: hardcover
ISBN: 9780786856862 (0786856866)
Publish date: 2006-04-01
Publisher: Disney Hyperion Books
Pages no: 279
Edition language: English
Series: Percy Jackson and the Olympians (#2)

3 years ago
http://oblue.booklikes.com Abandoned by Booklikes 5.0 The Sea of Monsters
text The Sea of Monsters
OMG so awesome! I do think there was a noticeable drag to parts of this book, but thought that Rick Riordan has done such a great job of moving Greek gods and goddesses we know into a modern setting with the threat of the Titans re-emerging to cause havoc. I love Percy. He wants to fit in at school ...
See review

4 years ago
http://susanvoss18.booklikes.com susanvoss18 4.5 The Sea of Monsters by Rick Riordan
text The Sea of Monsters by Rick Riordan
Book 1 was only OK for me but since Book 2 was just sitting there on Hoopla, I thought I would give it a try. I liked it a bit better than Book 1. It seemed to move along at a swifter clip and Percy is growing up a little. After all, he’s gotten to use his sword (Riptide) a few times and beaten back...
See review

5 years ago
http://alison.booklikes.com An Un-Calibrated Centrifuge 3.0 The Sea of Monsters
text The Sea of Monsters
This time around I gave The Lightning Thief an extra star and took one away from Sea of Monsters. This is a perfectly serviceable sequel. It's just not as good as some of the other books/as good as I remember. There are some continuity issues between this book and the first one from Mr D’s shirt...
See review
see community reviews