Tony Abbott
To begin with, I was born in Cleveland, Ohio, and lived in a small house on top of a hill. Together, my mother, a school teacher, and my father, a returning World War II paratrooper pursuing his college studies, brought tons of books into our small house on Cliffview Road. I guess you could say... show more

To begin with, I was born in Cleveland, Ohio, and lived in a small house on top of a hill. Together, my mother, a school teacher, and my father, a returning World War II paratrooper pursuing his college studies, brought tons of books into our small house on Cliffview Road. I guess you could say that these books were my first introduction to the world of literature. My father was always writing, so the sound of the typewriter was like the background music of my early childhood.When I was eight, we relocated, by car, to Connecticut where I finished elementary school and high school. I went to college at the University of Connecticut, majoring first in music (too hard), psychology (too many theories), and finally English (yes! lot and lots of books!). I graduated UConn with a bachelors degree in English Literature. After that, I traveled to Europe for quite a while, drank a lot of coffee, and wrote notebooks full of strange poetry. When I returned, I found work in a variety of bookstores and finally a library where I met my wife to be.It was when I began reading bedtime stories to my children that the spark of writing I had had for so many years finally turned to children's books. After many failures, my first published book, Danger Guys, was written while taking a writing class with renowned children's author, Patricia Reilly Giff. That first book, and the series that it began, became the cornerstone of my writing career and has become something of a cult favorite, by virtue of its being difficult to find. Since then, I've written over seventy-five books for readers ages 6 to 14, including the cult favorit popular fantasy saga, The Secrets of Droon.Over 8 million of my books have been sold worldwide, and my series and novels combined have been translated into Italian, Spanish, Korean, French, Japanese, Polish, Turkish, and Russian. Danger Guys was named a Children's Book-of-the-Month Club Main Selection, and the American Booksellers Association voted The Secrets of Droon among the "Top 10 List of Books to Read while Waiting for the Next Harry Potter." The series was also a Main Selection of the Children's Book-of-the-Month Club, and is on many school and library reading lists.In 2007, my novel Firegirl won the Golden Kite Award for Fiction presented by the Society of Children's Book Writers and Illustrators. It is the only award given by children's writers to children's writers, a peer award I remain honored at having received. It was also a selection of the Junior Library Guild.In the Spring of 2008, my second novel for Little, Brown Books for Young Readers appeared. The Postcard is a comedy/mystery about a boy who finds a clue on an old postcard while cleaning his recently deceased grandmother's Florida house, and who has no choice but to follow the mystery wherever it leads. Among other things, The Postcard is my love song to Florida's Gulf Coast, where my grandparents lived, and to old Florida, its architecture, roadside attractions, and Wild-West origins. It is, not least, my homage to the great hardboiled tradition of Hammett and Chandler, translated to a Florida setting. The Postcard won the 2009 Edgar Allan Poe Award for Best Juvenile Mystery. In 2009, The Haunting of Derek Stone, a series of four books for older readers, appeared from Scholastic Inc. Titles include: City of the Dead, Bayou Dogs, The Red House, and The Ghost Road. My literary and cultural interests include the films of Preston Sturges, the Road pictures of Bob Hope and Bing Crosby, and the Marx Brothers, and the writings of Charles Dickens, Mark Twain, P.G. Wodehouse, Jules Verne, Dashiell Hammett, Raymond Chandler, Seamus Heaney, Emily Dickinson, Ted Hughes, F. Scott Fitzgerald, John Steinbeck, The Arabian Nights, Beowulf, James Thurber, Philip Roth, Ralph Ellison, and William Faulkner. I'm currently a member of the Society of Children's Book Writers and Illustrators, the Yale Center for British Art, and other esteemed organizations. With my wonderful wife, two delightful and brilliant daughters, and the best dog imaginable, I live and work happily in Connecticut. 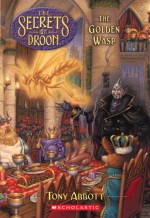 5 years ago
text The Secrets of Droon: The Hidden Stairs and the Magic Carpet
Seems similar to the Magic Tree House books. I've only read one, but I'd guess the series is the kids returning to Droon over and over helping solve problems in the land (though maybe there's occasional crossover from Droon into this world?). Nothing really stood out to me as being really interestin...
See review

7 years ago
text The Hidden Stairs and the Magic Carpet (The Secrets of Droon, #1) by Tony Abbott
Unlike most of the other children's books and series I've been reviewing recently, I never read The Secrets of Droon as a child; as a matter of fact, I'd never heard of the series until a few years ago. But I'm glad I finally got around to checking it out; if The Hidden Stairs and the Magic Carpet i...
See review

7 years ago
text Book Review: The Forbidden Stone
After reading two uninspiring MG books for the last couple of weeks, I thought that The Forbidden Stone would be no better especially that the blurb said, “Rick Riordan meets Dan Brown in this exhilarating and adventurous new tween series from beloved and bestselling author Tony Abbott.” And you kno...
See review

7 years ago
text Kringle
Kringle is a young orphan whose friend and guardian is taken away by goblins one night while protecting him. He vows to find her and sets off on a journey that involves elves, Romans, and pirates. Along the way, he grows up and becomes the man known around the world as Santa Claus.I went into this b...
See review

8 years ago
text
Derek has come a long way since the train accident and a lot has happened. Derek had trouble accepting the fact that the dead were coming back, but now, he has to accept he is apparently one of them!And at the same time, he has to close the wound to stop the Legion from taking over the world.Well, t...
See review
see community reviews
Need help?