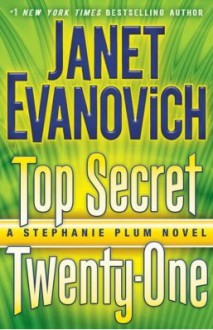 To top things off, Ranger—resident security expert and Stephanie’s greatest temptation—has been the target of an assassination plot. He’s dodged the bullet this time, but if Ranger wants to survive the next attempt on his life, he’ll have to enlist Stephanie’s help and reveal a bit more of his mysterious past.

2 years ago
http://bookjunkie57.booklikes.com bookjunkie57 4.0 Top Secret Twenty One
text Top Secret Twenty One
Stephanie Plum, Book 21 I Picked Up This Book Because: Continue the series The Characters: Stephanie Plum: Joe Morelli: Carlos “Ranger” Manoso: Grandma Mazur, Lula, Connie, Tank, The Story: Stephanie takes on the terrorist, who happens to also be a psychopath out to torture and kill Ranger. Ran...
See review

4 years ago
http://ilirwen.booklikes.com Bookloving writer 4.0 Top Secret Twenty-One
text Top Secret Twenty-One
This time around Stephanie works with Ranger, but the job takes a turn for the worse when Ranger's building is hit by a polonium attack. Someone Ranger encountered in his earlier life wants to kill him, and threatens Stephanie too. It sounds scary, but mostly this book is just good fun. Some feral C...
See review

7 years ago
http://BentBookworm.booklikes.com The Bent Bookworm 4.0 Top Secret Twenty-One
text Top Secret Twenty-One
At one point I was laughing so hard I was crying. Definitely the best of the Plum novels I've read during my recent binge of them. Hopefully #22 will come up to the same standard. These are all pretty much the same by now, but I keep reading them basically for the comfort of it. You come into it kno...
See review
see community reviews