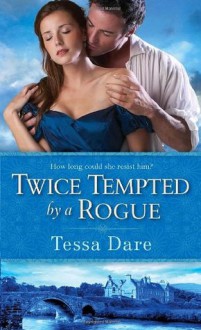 8 years ago
http://isabel.booklikes.com isabel 3.0
text
This is sweet story and very emotional. I would have enjoyed more, if there were more sex scenes :)BTW the portuguese word for "water" is "água".
See review

9 years ago
http://frlarsson.booklikes.com fr_larsson 4.0
text
Rhys st Maur´s story, after Spencer´s troubles and the death of Leo, he´s going back home. He´s been away fourteen years.Staying at the inn the Three Hounds, he realizes the owner is Meredith, the girl he used to know and daughter to his old friend. His old home is in ruins and now he´s decided to r...
See review

9 years ago
http://breecita.booklikes.com Bree Likes Books 5.0
text
Awwwww, this is my 2nd favorite of Tessa Dare's books. (The first is still A Lady by Midnight...but this one is kind of a close second.) Love the hero and the heroine so much, love the small village setting and the romance arc and just everything. BIG LOVE!
See review

9 years ago
http://malin.booklikes.com Malin 3.0
text
This is the second book in Tessa Dare's Stud Club trilogy, and although it works fine on its own, the tertiary plot of the book runs through the entire trilogy, and as a result, you may want to read the books in sequence.Rhys St. Maur, recently Lord Ashworth, has a death wish, but fate has yet to se...
See review
see community reviews