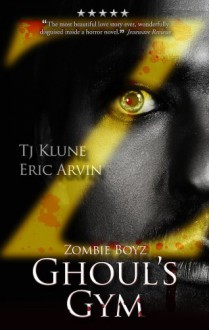 Ulysses Florence Hoak (Uly) is a buff, muscle bound giant who works at an exclusively gay gym with a pervy, disgusting boss who goes by the name of Stephen Dorian. The love of Uly’s life, Jake Howell, is the polar opposite of Uly physically and keenly aware that many, including Dorian, feel that Uly is wasting his time with the decidedly unbuff, slightly neurotic Jake In a wonderful twist, Jake is the dominant sexual partner in their relationship and Uly just worships the ground that his boyfriend walks on.

Unfortunately, this also makes Uly somewhat oblivious to Jake’s near paranoid worry that Uly will one day wise up, see him for the loser he is, and leave him, especially if the hound dog Stephen Dorian has his way. So, it is this unrealistic fear that prompts Jake to seek out one of the shadier patrons of the gym and purchase the steroid cocktail that will set him on the path to blissful buffness and allay his worries that Uly will leave him for someone bigger and better. Unfortunately, the juice that Jake is accidentally injected with is a “new and improved” version stolen from the military that turns the recipient into a violent, sex crazed killer. All hell breaks lose inside the gym that same day as others who are using the drug begin to change and that leaves Uly and a few friends running for their lives and Jake struggling to hold onto his own identity rather than succumb to the mindless, blood seeking mind of a killer.

I must tell you that this would be by any standard a gore-fest of a story. This writing team does not spare any space on the page when describing the bloody havoc that is wreaked by these jacked up zombies. But, the incredible twist, the element that transformed this from a simple horror story into a heart-wrenching tale of love and tenderness was the written moments of Uly and Jake’s meeting and their shared hopes and dreams for the future. Arvin and Klune interweave this sweet love story into the fabric of a horrifying and violent apocalypse and, by doing so, they pull you back from the edge again and again into this tender relationship. So when the outcome of this story hangs the life of these two men in the balance, you experience that “heart in your throat” moment and the person you hear saying, “no, no, please, let him live” is you, silently begging these two brilliant authors for a happy ever after. This was not just a “zombie story”. Ghoul’s Gym was a glimpse at how love can be selfless and courageous and lasting, despite fate’s intervention. Just beautiful.”

8 years ago
http://MMarte.booklikes.com MMarte 3.0 Zombie Boyz: Ghoul's Gym
text Zombie Boyz: Ghoul's Gym
*** 3 horrifyingly hilarious stars ***Wow, this sure was something else! This was a blood-splatter-gore-fun-fest galore, Deluxe edition! This was like taking a emotional roller coaster where it's a bit angst in the beginning, like "how will this end?" and it builds and builds, turning creepy before ...
See review