Mike Mignola
Mike Mignola is best known as the multiple award-winning creator, writer, and artist of "B.P.R.D." and "Hellboy", but has fostered several other projects like "The Amazing Screw-On Head" and "Baltimore" with Christopher Golden. Although he began working as a professional cartoonist in the early... show more

Mike Mignola is best known as the multiple award-winning creator, writer, and artist of "B.P.R.D." and "Hellboy", but has fostered several other projects like "The Amazing Screw-On Head" and "Baltimore" with Christopher Golden. Although he began working as a professional cartoonist in the early 1980s, drawing 'a little bit of everything for just about everybody' - including characters like Batman and Wolverine - he was also a production designer on the Disney film "Atlantis: The Lost Empire". Mignola also acted as a visual consultant to Guillermo del Toro on "Blade 2" and the film versions of Hellboy, which were broadly adapted by del Toro from the original comic series. Mike Mignola currently lives in southern California with his wife, daughter, and cat. 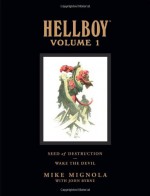 2 years ago
text It's Hellboy and Ghost in one comic.
Do I really need explain the appeal for me? I didn't think so. Plus, I pretty much just love everything Hellboy... Because, bless his soul, he's been raised by nazis and also kicks their asses on a regular basis. He's kinda swoon-y in a non-sexual, but I love that fact about you way for me. ...
See review

3 years ago
text Cold Moon Over Babylon
Can Michael McDowell write a bad horror story? I don´t know yet, because Cold Moon Over Babylon, my third book by this author, has been excellent … truly excellent, in the most terrifying kind of way. I had to look numerous times over my own shoulder, because I got the impression that someone (or so...
See review

3 years ago
text Love, love, love
This is apparently a reboot, but I couldn't tell. This integrated the old story so well that I didn't feel lost at all. Rathraq is back. God, scarecrow thing, something new? I'm not quite sure what he is, or if he's as good as he was before, but I'm very interested in finding out now!
See review

4 years ago
text Hellboy, Vol. 1: Seed of Destruction
I finally, finally got my hands on some of the comics! I've seen the movies several times and loved them, but I always wondered if the comics were as good, or better. Now...I'm not sure. I very much enjoyed this first volume, but I think I like the movies just a little bit more. I was kind of surpri...
See review

4 years ago
text Cold Moon Over Babylon
He imagined that he had been hypnotized by the moon, thrown into one of those trances that were common enough at night, on lonely stretches of road, to solitary drivers. “That’s it,” he whispered to himself, “I was led astray by the moon. But now the moon’s brought me home safe again . . .” Holy mo...
See review
see community reviews
Need help?