Log in with Facebook
or
Wrong email address or username
Sign up
Already on BookLikes? Log in!
Incorrect verification code
Please, check your email, the code to access your BookLikes blog was sent to you already.
Enter code:
« Back Send
back to top
Search tags: secret-agents This was a great book until the last 25% or so.

Extra points for excellent russian here and there, tho I still can't figure out why stupid typos were left untouched. "Pecherskaya" was spelled "Pe r cherskaya" literally half the time. No matter the language, it's an annoyance. "The band was called "Gryaznykh Angelov"...". Say what? @.@ A minor mistake, sure, but on top of interchangeable peRcherskaya it screamed "I don't really care. they won't get it anyway.", not to mention the name is such a cliche. What else... "'mu'dak' means 'asshole'". Sure if "asshole" means "meany". Let's be nice, I guess. So, that was the minor stuff.

That leaves me with - what? 75% is pure awesomeness, save for the typos. I can easily dish out 5 and more shiny stars. The last 25% tho? A star and a half maybe. This book is all over the place. I am not even sure I am attaching correct tags here.

- Urban history, for example. This could have taken place anywhere. In the woods or in the mountains, for all I care. But there was a mentioning of some humans in cars and apartment complexes so... I guess it's on an urban-y side.

- Law enforcement, PI. Not really. Bert is a beta (read: a butler and a cook and a nanny) to an asshole who happens to be in charge of PBI (paranormal bureau of investigations).

- Secret agent, spy, politician, diplomat. Same - Bert, the PBI asshole's beta, is sent on a diplomatic mission he has no prior training for, obvisly (see "beta" definition above).

There is no chemistry between MC's. None. Except for Will proclaiming his undying love for Bert every couple of pages or less.

And then there is all this talking.... I am surprised the characters (all of them, except for the babies) didn't talk their heads off.

I am so tempted to attach "viking" tag to these books, lol

Many many thanks for all the pages we already have :)

Kira, what would I do without you? ;) 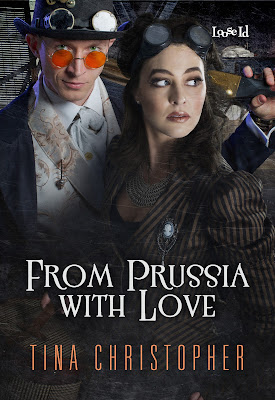 From Prussia with Love

Clara Redbeck has one goal: to prove to the sods at work—and to herself—that the best man for the job can be a woman. To do that, she must prevent a traitor from blowing London to bits. If only the dashing first mate of the dirigible she’d been tasked to plunder didn’t set her aflame.

Garrett Dewhurst has one goal: to execute the coup of a lifetime. His plans do not include a spanking dalliance with the most intriguing woman he has ever met.

With each encounter, the fire between them burns hotter and their need grows stronger. Finally, the cramped cabin aboard the Bismarck becomes their intimate playground, where Garrett introduces Clara to the pleasure of submission and they explore their passion in every way possible.

Clara and Garrett want a future together, but each holds a secret that if revealed could cost them everything. When danger closes in, they have to choose between protecting themselves or the whole of London.

Skids of boxes and crates were stacked back-to-back with limited space between them, just enough to walk through. A few lamps scattered through the length of the hold offered dim light that barely showed them the back wall. He picked up a steamtorch. With a click and a whirr it came to life in his hand.

“Is it everything you’d expected?”

She moved past him, turning as much as the narrow space permitted. Her gaze roved about the vast hold. “It’s so big.” Her words were a breathy whisper. “It’s huge.” Her eyes sparkled with the mischief he’d come to enjoy during their exchange.

“It is indeed quite large. In fact, the more you…explore, the bigger you’ll find it.”

He bit his tongue to suppress his laughter at the look she threw him, but it became more and more difficult when her lips twitched. “I’m sure you’ll be only too happy to show me.”

Clara Riesenbeck disarmed him like no woman before her.

She ran her hand across a support beam made of a new compound. “It looks soft.” She stroked the slightly yielding surface. “But it’s actually quite hard.” She tossed an arch look over her shoulder at him.

“Yes, it’s vulcanized rubber. It starts out soft and pliant but gets harder under heat and…pressure.”

Her lips curled at the corners despite her obvious efforts to school them into a disapproving frown.

Why Steampunk Is Awesome!
by Tina Christopher

How do you do? I hope you are well and would like to thank you for your kind invitation to join you for a lovely cup of tea and a vibrant discussion about the awesomeness of Steampunk.

Let’s begin with the definition of Steampunk. I like the way the Ministry of Peculiar Occurrences describes Steampunk:

Steampunk is modern technology—iPads, computers, robotics, air travel—powered by steam and set in the 1800’s.

The main reason I love Steampunk and believe it’s amazing, fun and fabulous? I get to make s*** up!

I can take history—for me it’s Victorian London—and turn it on its head. I’ve always wondered why Her Majesty Queen Victoria, the woman who ruled an empire, never supported other women and attempted to give them the same rights and power she herself enjoyed. I understand she was bound by her time and the rules imposed on her, and obviously I don’t know what went on behind closed doors, but this has been a question that stayed with me.

Which is why in From Prussia With Love she has done exactly that: given women the vote and the right to make their own decisions. Now my characters have a whole new set of problems;).

Another reason I love steampunk is the chance to be an inventor. I get to mix the past and the future. What creature comforts do we have now and what would I love to have? I can make it happen. I can develop and imagine and have fun with it in my stories. I can even go completely over the top, like my aerocycles. Who doesn’t want a flying motorcycle? I try to think like a Victorian scientist and do my best to work with materials that were present at the time of my story (late 1890s).

To me steampunk means swashbuckling adventure filled with laughter and on-the-edge-of-your-seat passion. If you haven’t already I’d definitely suggest you give it a try. And I’m not just saying that because I write steampunk;).

Thank you so much for having me and have a great rest of the week.

Tina Christopher spent her early years flitting across the Channel between Germany and England. After touring the world extensively—from hanging out with elephants in South Africa to hiking through the wilderness in Alaska—she finally laid down roots in Toronto. Although Canada’s winters may be frigid, Tina’s characters are anything but!

Like most writers, Tina often hears voices in her head, but it took the encouragement of an editor friend to have her actually put fingers to keyboard. While those first stories will never see the light of day, she’s subsequently honed her craft and learned to build not just worlds, but entire galaxies. History has always been an area of interest for her, and she’s enjoys few things more than imagining what could happen when history and future meet.

When not imagining far-away worlds and scorching-hot encounters, Tina can be found on her sofa working through her never-ending TBR pile or venturing into the real world—whether to a nearby café or a passport-required destination. She’s a member of the Romance Writers of America Toronto chapter and looks forward to where her characters take her next!

To connect with the author online: