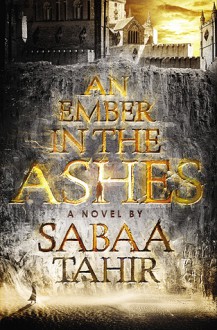 An Ember in the Ashes
by: Sabaa Tahir (author)

LAIA is a Scholar living under the iron-fisted rule of the Martial Empire. When her brother is arrested for treason, Laia goes undercover as a slave at the empire’s greatest military academy in exchange for assistance from rebel Scholars who claim that they will help to save her brother from execution.

ELIAS is the academy’s finest soldier—and secretly, its most unwilling. Elias is considering deserting the military, but before he can, he’s ordered to participate in a ruthless contest to choose the next Martial emperor.

When Laia and Elias’s paths cross at the academy, they find that their destinies are more intertwined than either could have imagined and that their choices will change the future of the empire itself.
show less
Format: hardcover
ISBN: 9781595148032 (1595148035)
ASIN: 1595148035
Pages no: 464
Edition language: English
Category:
Fantasy, Young Adult, High Fantasy, Romance
Series: An Ember in the Ashes (#1)

4 years ago
http://lorimurray.booklikes.com Lori's Little House of Reviews. 5.0
text
Just have to say I just loved the book a whole lot. I have a favorite new character in Elais. I love how real he is and how much he wants to do the right thing even if he gets killed because of it. I like Laia and at the beginning I didn't think I would like her at all. I am so happy that it didn't ...
See review

5 years ago
http://kaiespace.booklikes.com YA Fantasy - K.A. Wiggins 4.0 An Ember in the Ashes
text An Ember in the Ashes
It took me a lot to get into this book - I'd put it down and not really care about picking it back up for the first 1/3-1/2, which I think was due to a combination of the dual POV narrative and the dark and dystopian setting. However, when I did pick it up I'd get sucked into the story and by the en...
See review

5 years ago
http://brokebookbank.booklikes.com The Layaway Dragon 0.0 An Ember in the Ashes
text An Ember in the Ashes
WOW!!! I cannot wait to read the next one, though I'm going to have to for my library hold to come through. :(I'll be back with a review as soon as I can.
See review
see community reviews

From a Certain Point of View (Star Wars)...