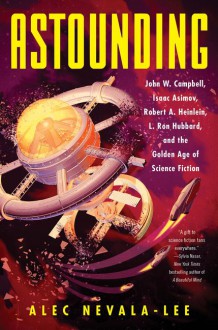 Drawing on unexplored archives, thousands of unpublished letters, and dozens of interviews, Alec Nevala-Lee offers a riveting portrait of this circle of authors, their work, and their tumultuous private lives. With unprecedented scope, drama, and detail, Astounding describes how fan culture was born in the depths of the Great Depression; follows these four friends and rivals through World War II and the dawn of the atomic era; and honors such exceptional women as Doña Campbell and Leslyn Heinlein, whose pivotal roles in the history of the genre have gone largely unacknowledged. For the first time, it reveals the startling extent of Campbell’s influence on the ideas that evolved into Scientology, which prompted Asimov to observe: “I knew Campbell and I knew Hubbard, and no movement can have two Messiahs.” It looks unsparingly at the tragic final act that estranged the others from Campbell, bringing the golden age of science fiction to a close, and it illuminates how their complicated legacy continues to shape the imaginations of millions and our vision of the future itself.
show less
Format: hardcover
ISBN: 9780062571946
Publish date: 2018-10-23
Pages no: 544
Edition language: English
Category:
Non Fiction, History, Literature, Biography Memoir