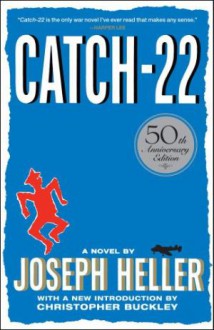 At the heart of Catch-22 resides the incomparable, malingering bombardier, Yossarian, a hero endlessly inventive in his schemes to save his skin from the horrible chances of war. His efforts are perfectly understandable because as he furiously scrambles, thousands of people he hasn't even met are trying to kill him.

His problem is Colonel Cathcart, who keeps raising the number of missions the men must fly to complete their service. Yet if Yossarian makes any attempts to excuse himself from the perilous missions that he is committed to flying, he is trapped by the Great Loyalty Oath Crusade, the hilariously sinister bureaucratic rule from which the book takes its title: a man is considered insane if he willingly continues to fly dangerous combat missions, but if he makes the necessary formal request to be relieved of such missions, the very act of making the request proves that he is sane and therefore ineligible to be relieved. Catch-22 is a microcosm of the twentieth-century world as it might look to some one dangerously sane -- a masterpiece of our time.
show less
Format: paperback
ISBN: 9780684833392 (0684833395)
Publish date: 2004-09-04
Publisher: Simon & Schuster
Pages no: 453
Edition language: English
Category:
Classics, Humor, Literature, American, Historical Fiction

4 years ago
http://antao.booklikes.com Musings/Träumereien/Devaneios 4.0 Total Bastards: "Catch-22" by Joseph Heller
text Total Bastards: "Catch-22" by Joseph Heller
(Original Review, 1981-02-20)The most memorable part for me is Milo sitting in a tree. He passes Yossarian something and encourages him to taste it - it is disgusting. What is it? Chocolate covered cotton. He's bought up the entire Egyptian cotton crop and can't find a way to sell it on. Every time ...
See review

5 years ago
http://ToniFGMAMTC.booklikes.com Fangirl Moments and My Two Cents 3.0 Catch-22
text Catch-22
For a lot of this book, it's just ridiculous. I mean the men don't want to be in war. They try to come up with every way possible to get out. The weird rules always block them. It's crazy and humorous, but then at the same time, people are dying. I guess war really does feel this way when you'r...
See review

6 years ago
http://Burfoa.booklikes.com Burfobookalicious 4.0 Classic top 100 novel!
text Classic top 100 novel!
Classic satirical take on the futility of war and the chasm between the accompanying rhetoric and the reality of conflict. Wonderfully witty and thought-provoking, Heller serves up one of the top 100 novels of modern literature, a 'must read' book, which has the quality to remain significant over ti...
See review

6 years ago
http://Bookfields.booklikes.com Gosh I Wish I was a Good Writer 5.0 A Classic!
text A Classic!
This is one of those books I was forced to read in High School. They were in such a rush to move on to the next book I don't remember reading more than a chapter or two. So here I am checking it out years later. I can't believe how wonderful, funny, sad and relatable Catch 22 is! Yossarian may be th...
See review

6 years ago
http://pagefault.booklikes.com bookaneer 5.0 Catch-22
text Catch-22
This book made me want to slam my head into a concrete wall again and again and again until it stopped.Which was pretty much the point. Also, probably one of the most quotable books ever written.
See review
see community reviews