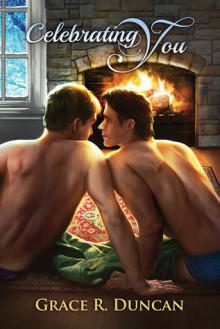 Celebrating You
by: Grace R. Duncan (author)
on BookLikes:

Through tree decoration, dinner, and a chess game, Daniel and Jake discover a connection between them that hints at a possibility both had long declared impossible. When the chess game is over and they’re in each other’s arms, they realize how good it feels… and how right. But after having lost everything, are they willing to believe in the possibility of something beyond basic survival?

8 years ago
http://SusanReads.booklikes.com Susan 3.0 Celebrating You
text Celebrating You
2.5 starsWhat a confusing story.I think this takes place 3 years after the apocalypse/the plague/world war III has happened. Take your pick, I have no idea which one it was.
See review

8 years ago
http://Elsbeth66.booklikes.com ~~ Elsbeth ❤❤❤ MM-Romance ~~ 3.0 Celebrating You
text Celebrating You
Celebrating You, a Christmas story set in a post-apocalyptic setting!!Two lonely men meet on Christmas Eve. Both have lost their partners due to the virus..Nothing more, nothing less... Just..
See review

Mandy, I read obsessively rated it

9 years ago
http://Mandyreadsobsessively.booklikes.com Mandy, I read obsessively 4.0 Almost missed out on this one
text Almost missed out on this one
3.75*First I have to say, had I just read the blurb of this book I would have passed it up. It isn't the kind of story that would appeal to me, but I pre-ordered the DSP calendar and really do want to read all of the stories and I saw my friend Kris Kindleromance's review of it over on BookLikes and...
See review

9 years ago
http://KindleRomance.booklikes.com KindleRomance 5.0 Celebrating You by Grace R. Duncan (5 Stars)
text Celebrating You by Grace R. Duncan (5 Stars)
The world, as we know it, has been wiped out. Fortunately, true love is still a reality. Daniel and Jake have both spent the past several years living on their own. Daniel has managed to set up a home and has become fairly self-sufficient. Jake has been wandering around the world not really sure w...
See review

9 years ago
http://tnareviews.booklikes.com The Novel Approach Reviews 4.0 Celebrating You
text Celebrating You
Celebrating You is a touching and heartwarming holiday story that does exactly the job it’s supposed to do. Grace R. Duncan offers a spark of magic and the promise of love between two men who have all the time in the world to rebuild their lives, not on the shared pain of their pasts but on the hope...
See review
see community reviews