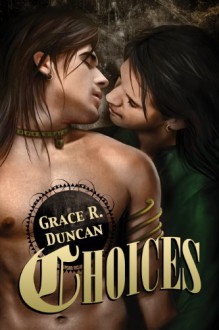 3.57 35
Golden Collar: Book 1 Born and raised a gypsy in the late eleventh century, Teman values freedom over everything. He and his best friend, Jasim, are thieves for hire—until one night they're caught and their precious freedom is revoked. Given the choice between the dungeons or palace pleasure... show more
Golden Collar: Book 1

Born and raised a gypsy in the late eleventh century, Teman values freedom over everything. He and his best friend, Jasim, are thieves for hire—until one night they're caught and their precious freedom is revoked. Given the choice between the dungeons or palace pleasure slavery, they become slaves, but Teman vows to escape someday.

Bathasar doesn’t want the throne. He supports his brother instead, which suits their sadistic father, Mukesh. When Teman, the handsome slave Bathasar has secretly been watching, saves his life, Bathasar requests a slave for the first time. Before long, Bathasar and Teman fall in love. But all is not well. One day Mukesh brutalizes Teman before the court, angering the empress of a neighboring nation. To appease her, he then offers her Jasim as a gift, and Teman decides to stay with Bathasar for now—despite the abuse he may suffer.

The peace doesn’t last. Mukesh plans to invade Jasim's new country, and Bathasar must find a way to stop the destruction. But if he succeeds, he'll ascend to the throne and have the power to grant Teman his liberty. Then Teman will surely leave him. What other choice could a gypsy make?

7 years ago
http://lacrimsonfemme.booklikes.com La Crimson Femme 4.0
text
M/m kinksters who enjoy dub-con, this is a must read. Ms. Duncan is a new to me author. She's one I will be following. This book is a richly woven tale of sexual servitude, sexual slavery, love and court politics. Best friends Teman and Jasim used up all their luck. They are basically "re-posse...
See review

7 years ago
http://vivian01.booklikes.com No Glitter Blown 4.0
text
Sensual and hot 1st millennial political thriller.This isn't reality, it's romanticized sexual slavery. It is simmering with flashes of molten hot as Jasim and Teman become indoctrinated into the palace pleasure slave corp after being caught red-handed. This a gentle take on harem life with leisurel...
See review

7 years ago
http://KindleRomance.booklikes.com KindleRomance 2.0
text
Is freedom more important than spending your life with your one true love? Teman and his friend, Jasmin, have been caught stealing for the last time. They have a choice of either going to the dungeon or becoming a pleasure slave for the palace. They both choose the palace and begin a very long sexua...
See review