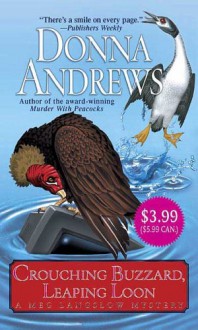 For companionship, besides a crew of eccentric techies, she has a buzzard with one wing---who she must feed frozen mice thawed in the office microwave---and Michael’s mother’s nightmare dog. Not to mention the psychotherapists who refuse to give up their lease on half of the office space, and whose conflicting therapies cause continuing dissension.

This is not what Meg had in mind when she agreed to help her brother move his staff to new offices.In fact, the atmosphere is so consistently loony that the office mail cart makes several passes through the reception room, with the office practical joker lying on top of it pretending to be dead, before Meg realizes that he’s become the victim of someone who wasn’t joking at all. He’s been murdered for real.
show less
Format: mass market paperback
ISBN: 9780312939595 (0312939590)
Publish date: 2006-02-07
Publisher: St. Martin's Paperbacks
Pages no: 320
Edition language: English
Category:
Humor, Mystery, Cozy Mystery
Series: Meg Langslow (#4)

9 years ago
http://beclaskus.booklikes.com beclaskus 4.0
text
I had quite a few lough out loud moments in this book. Hilarious
See review

10 years ago
http://brokebookbank.booklikes.com The Layaway Dragon 3.0 Crouching Buzzard, Leaping Loon
text Crouching Buzzard, Leaping Loon
This series has steady improved and I am now comfortable with saying I like it. I enjoyed this book. Its not the greatest book, but its a quick fun read. I'm not sure why but in this cozy mystery I'm never at the edge of my seat, trying to figure it out myself or dying to know who the murderer is. I...
See review

All The Things rated it

11 years ago
http://AdeleDawn.booklikes.com All The Things 4.0
text
I'll be picking up more books in this series. Very fun read, good pace, and interesting characters.
See review