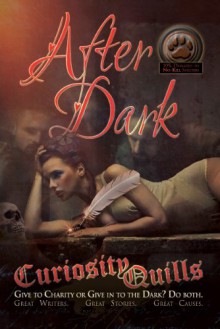 Just like its twin, 10% of every purchase will go straight to animals in need. The CQ team has selected humane societies on both the East and West coast that spend well and do not stray from their “no-kill” policies.

- Mirror Amour - Jade Hart
When a sex circus plants itself unapologetically in the middle of her busy life, a young microbiologist finds herself tumbling headlong into a night of unbridled sensuality that takes her straight to a fork in the road that will forever shred her comfy boring world.

- Pop Star Fist Fight - Jose Prendes
A handful of midgets. Two starlets. One shot at a title of the Queen of Pop. Fame Fucking Hurts.

- Precious Blood - Gerilyn Marin
Weary of her existence as a vampire, Annalese seeks the truth to a legend which says she may live again if she consumes the blood of a fallen angel. Misunderstandings, and a not necessarily willing Fallen One, bring about an unforeseen turn of events.

- The Quark Machine - Nathan Yocum
Professor Northwip invents an AI computer that can self-replicate on a nano-scale. His exploration of infinitely small realities is cut short when he suddenly wakes up naked on an island with no memories of how he got their. What perilous dangers has Professor Northwip unleashed? Who fears the true nature of the Quark Machine?

- The Quarry - A W Exley
Jema Johnson delivers a pounding in the court room, but it's the pounding at the base of her skull draining her spirit and sanity, until a one night encounter in a club offers far more than a headache cure.

Heart of the Kraken - A.W. Exley