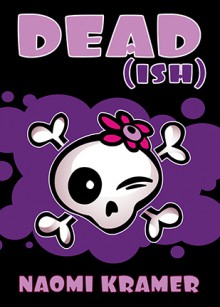 5 years ago
http://FatherCraneMadeMeDoIt.booklikes.com FatherCraneMadeMeDoIt 1.0
text
(Free book through Kindle store.)Easily the absolute worst book I have read this year, possibly my entire life. I can't even fathom how it is possible to write something so absolutely awful.Bad writing. Poor plot development. No character development. I hate writing negative reviews, but there is no...
See review

7 years ago
http://lilalockhart.booklikes.com Lila's Lair 1.0 DEAD[ish]
text DEAD[ish]
WARNING: This review is going to contain bitching. A lot of bitching. While I like to be fairly positive with my reviews, sadly folks, this is not going to be one of them. Sorry!I was absolutely appalled by this book. I didn't have high expectations to being with, yet they still managed to be pulver...
See review

7 years ago
http://krazykiwi.booklikes.com Krazykiwi @ Kiwitopia 3.0 DEAD[ish] (DEAD[ish] #1)
text DEAD[ish] (DEAD[ish] #1)
This was one of the freebies I got with installing an e-book reader on my phone, and I usually ignore those, but for once I'm glad I didn't. It's a fun fast little read. The characters are cute, and if I've ever wanted to smack a ghost, it's this one, but it was entertaining from beginning to end, e...
See review

7 years ago
http://authorcharity.booklikes.com authorcharity 3.0 DEAD[ish]
text DEAD[ish]
It was okay. I'm not sure I understand how this is going to be a whole series but for a short story is was enjoyable. I say, give it a shot. It took me a few minutes of reading to get used to the odd way Mike spoke and I kept having to flip back in the story because I would forget who POV I was in, ...
See review

7 years ago
http://TheBecks.booklikes.com TheBecks 1.0
text
Errr... Right. Where to even start? I picked this up for free a while back for my Nook, because, come on - that cover is cute! I just now got around to reading it, though, and, well, it wasn't the best. This whole story, novella, whatever, just felt unfinished. Starting from a whole chapter of Mike'...
See review
see community reviews