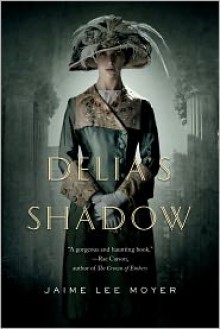 It is the dawn of a new century in San Francisco and Delia Martin is a wealthy young woman whose life appears ideal. But a dark secret colors her life, for Delia’s most loyal companions are ghosts, as she has been gifted (or some would say cursed) with an ability to peer across to the other side.

Since the great quake rocked her city in 1906, Delia has been haunted by an avalanche of the dead clamoring for her help. Delia flees to the other side of the continent, hoping to gain some peace. After several years in New York, Delia believes she is free…until one determined specter appears and she realizes that she must return to the City by the Bay in order to put this tortured soul to rest.

It will not be easy, as the ghost is only one of the many victims of a serial killer who was never caught. A killer who after thirty years is killing again.

The Reading Jackalope rated it

7 years ago
http://melanirobison.booklikes.com The Reading Jackalope 2.0 Delia's Shadow
text Delia's Shadow
This was just long and plodding and not at all enjoyable. The writing was aggressively mediocre. The characters were moved along by plot rather then characterizations. The plot made no sense at all and felt like a short story's worth of plot forced into novel length. That can work when the writing i...
See review

8 years ago
http://Lagnella.booklikes.com The Book Junkie 5.0 Delia's Shadow
text Delia's Shadow
Delia's shadow had my full attention right from the beginning. Aside from the absolutely gorgeous cover, the story takes place nine years after the great San Francisco earthquake so the historical setting was extremely interesting. Our main characters, Gabe and Delia had both lost loved ones in th...
See review

In Libris Vita rated it

9 years ago
http://shellyfranz.booklikes.com In Libris Vita 4.5 Much darker than anticipated
text Much darker than anticipated
Still an excellent read, I just wish I'd been better prepared for the level of violence/gore/horror. Delia sees ghosts. But one in partcular, her "Shadow" follows her all the time, across the country. When she returns to San Francisco to help celebrate her best friend's wedding, Shadow gets dem...
See review

9 years ago
http://thistle.booklikes.com thistle 0.0
text
Set in 1915 San Francisco, except more like 1950 (or perhaps 1940 minus the approach of war).
See review
see community reviews