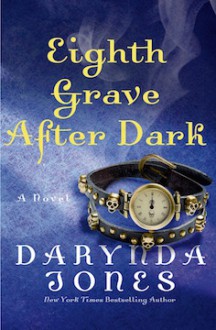 Charley's been forbidden to step foot off the sacred grounds. While the angry hellhounds can’t traverse the consecrated soil, they can lurk just beyond its borders. They have the entire team on edge, especially Reyes. And if Charley didn’t know better, she would swear Reyes is getting sick. He grows hotter with every moment that passes, his heat scorching across her skin every time he’s near, but naturally he swears he’s fine.

While the team searches for clues on the Twelve, Charley just wants answers and is powerless to get them. But the mass of friends they’ve accrued helps. They convince her even more that everyone in her recent life has somehow been drawn to her, as though they were a part of a bigger picture all along. But the good feelings don’t last for long because Charley is about to get the surprise of her crazy, mixed-up, supernatural life….
show less
Format: hardcover
ISBN: 9781250045652 (1250045657)
Publish date: 2015-05-19
Publisher: St. Martin's Press
Pages no: 352
Edition language: English
Category:
Paranormal, Urban Fantasy, Paranormal Romance, Mystery, Paranormal Mystery
Series: Charley Davidson (#8)

3 years ago
http://Pippen.booklikes.com My Bag Of Books 4.0 Enjoyable.
text Enjoyable.
Kind of enjoyable. The snark, as always is there, but this story is a little convoluted. I feel sorry for Charley, this chick just can’t get a break, bad and worse are always happening to her. This so far is my least favorite of the series. Charley has to live in a old convent (sacred ground), has...
See review

4 years ago
http://bookjunkie57.booklikes.com bookjunkie57 4.0 Eighth Grave After Dark - ReRead
text Eighth Grave After Dark - ReRead
Re-Read:March 21 - March 25 2018Oh Charley, even on sacred ground you can get into so much mischief. I’m glad I am doing a re-read. I had completely forgotten the drama that surrounded BEP’s birth. I still experienced a wealth of heartache at the end of the book. I knew it was coming but it still di...
See review

6 years ago
http://mnkyle89.booklikes.com Megan's Book Madness 5.0 Eighth Grave After Dark
text Eighth Grave After Dark
By far my favorite book from this series. I am extremely happy that Charley was 8 months preggers at the start of this book. I love Charley. I love her humor but 8 months of her pregnant might have been a bit much for me to handle. Plus she can't really kick that much ass when she's pregnant and whi...
See review

7 years ago
http://CarolynF.booklikes.com Carolyn Cannot Live Without Books! 2.5 EIGHTH GRAVE AFTER DARK by DARYNDA JONES
text EIGHTH GRAVE AFTER DARK by DARYNDA JONES
I was so disappointed with this book and I think that's because I'm excited when I sit and open up one of the author's books, maybe too excited. The jokes were wearing a little thin. But got through that. The ending is what disappointed me. A lot cliche. I'm just hoping this isn't a trend. :( 2-1/2 ...
See review
see community reviews