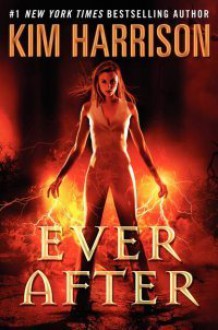 Ever After
by: Kim Harrison (author)

If Rachel doesn't give herself up, they will die. Forced by circumstance, Rachel teams up with elven tycoon Trent Kalamack—a partnership fraught with dangers of the heart as well as betrayal of the soul—to return to the ever-after and rescue those she loves. One world teeters on the brink of interspecies war, the other on the brink of its very demise—and it's up to Rachel to keep them both from being destroyed.
show less
Format: hardcover
ISBN: 9780061957918 (0061957917)
Publish date: 2013-01-22
Publisher: Harper Voyager
Pages no: 435
Edition language: English
Category:
Magic, Paranormal, Witches, Urban Fantasy
Series: The Hollows (#11)

6 years ago
http://CarolynF.booklikes.com Carolyn Cannot Live Without Books! 4.0 EVER AFTER by KIM HARRISON
text EVER AFTER by KIM HARRISON
Who knew that the same man who tormented you and made you crawl would end up being a friend. And who knew I was so bloodthirsty. Bad people came back into Rachel's life and was saying out loud, "Kill him!" I liked the book up to the ending which just left me scratching my head.
See review

8 years ago
http://SutekoWriter.booklikes.com The best books you never read 5.0 The Undead Pool by Kim Harrison
text The Undead Pool by Kim Harrison
In this lead up to the series finale the action comes fast and furious. Rachel is driving when misfired charm nearly kills her. From that very action packed opening Ms Harrison drags us through a mix of Elves, Vampires, Werewolves and so much more. Rachel has become the lodestone for Mystics; the...
See review

8 years ago
http://SutekoWriter.booklikes.com The best books you never read 5.0 Ever After by Kim Harrison
text Ever After by Kim Harrison
Yet again we are drawn into the world of the Hollows and Rachel is fighting to save the world, or in this case the Ever After. The mad demon has pulled all the imbalances of the LeyLines together in one place and it is slowly collapsing the Ever After. Rachel has to figure out how to save everything...
See review

9 years ago
http://HeatherJay.booklikes.com HeatherJay 5.0 Ever After (Rachel Morgan)
text Ever After (Rachel Morgan)
Kim Harrison was my introduction to urban fantasy. She has a special place in my heart. Unfortunately, the last several Rachel Morgan books have left me bored and sad that my favorite characters were gonna go out with a whimper instead of a bang. Well, hall-e-fucking-luah, Rachel is back and she KIC...
See review
see community reviews