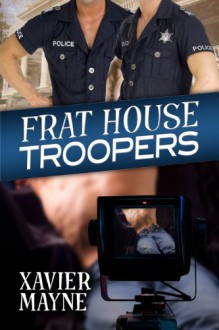 Despite his mortification, Brandt gives the audition his best “shot”—and becomes an overnight sensation. But to meet the man behind the operation, he'll have to give a repeat performance, this time live on webcam opposite the highest bidder. Donnelly makes sure to win that auction for his partner’s sake, but their plan has a flaw: faking it is not an option.

In the aftermath, Brandt is a humiliated mess trying desperately to come to terms with what he’s had to do for the job and his own mixed feelings. But Donnelly has been on a journey of discovery of his own. Suddenly everything the two men thought they knew about themselves and each other gets turned inside out. Meanwhile, they still have a case to solve… but it may not be the case they thought it was.
show less
Format: ebook
ISBN: 9781623801335 (1623801338)
Publish date: December 19th 2012
Publisher: Dreamspinner Press
Pages no: 260
Edition language: English
Category:
Humor, Funny, Romance, Erotic Romance, Mystery, Contemporary, Crime, Glbt, M M Romance, Gay, Gay Romance, Gay For You
Series: Brandt and Donnelly Caper (#1)

9 years ago
http://makhda.booklikes.com makhda 3.0 Frat House Troopers
text Frat House Troopers
"I watched it because I wanted to. Because it showed me what I've been trying not to know. Because it made me see you clearly." He sighed, then whispered, "Because it changed me into who I've always been.""Let's be clear. I love you. Not in the 'I love you, man' way, but in the 'I want wake up with ...
See review

9 years ago
http://natasha.booklikes.com books 'n shit 2.0
text
Uhh... DNF about 20% in. It's just not working for me.
See review
see community reviews