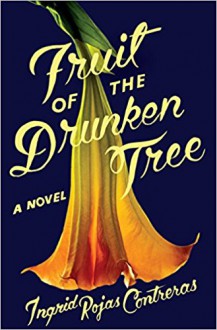 Fruit of the Drunken Tree: A Novel
by: Ingrid Rojas Contreras (author)

When their mother hires Petrona, a live-in-maid from the city's guerrilla-occupied slum, Chula makes it her mission to understand Petrona's mysterious ways. But Petrona's unusual behavior belies more than shyness. She is a young woman crumbling under the burden of providing for her family as the rip tide of first love pulls her in the opposite direction. As both girls' families scramble to maintain stability amidst the rapidly escalating conflict, Petrona and Chula find themselves entangled in a web of secrecy that will force them both to choose between sacrifice and betrayal.

Inspired by the author's own life, and told through the alternating perspectives of the willful Chula and the achingly hopeful Petrona, Fruit of the Drunken Tree contrasts two very different, but inextricable coming-of-age stories. In lush prose, Rojas Contreras sheds light on the impossible choices women are often forced to make in the face of violence and the unexpected connections that can blossom out of desperation.
show less
Format: hardcover
ISBN: 9780385542722 (0385542720)
Publish date: 2018-07-31
Publisher: Doubleday
Pages no: 320
Edition language: English

2 years ago
http://debbiekrenzer.booklikes.com debbiekrenzer 3.0
text
I had a really hard time getting into this book. Actually, I never did get into this book. It was rather slow for me. It was about the day to day in Bogota and dealt with a well off household who hired poor girls to clean and the poor girls.With it being day to day activities, it was written day to ...
See review