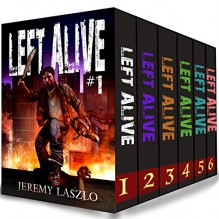 The world is dead. Plants gone. Animals gone. The air is thick with dust and ash. Water has turned to murky cesspools of death and decay. Life and Earth as we know it are gone—at least all the good parts.
It’s been almost a year since the first signs that we killed our planet began to arise. Order and humanity are gone now, replaced by vigilante justice and survival at all costs. Nine months have passed since the quarantines were put in place. Six months since we realized it was too late, and just after that the governments of the world fell.
That was nearly seven billion people ago, and now Charles has decided it is time to pack up and leave in search of the one thing still worth living for—his daughters.
With rumors of roving bands of cannibals, and even zombies, he knows making the journey is a long shot, but he has to try. He promised their dying mother that he would keep them safe and has every intention of doing just that, come hell or hungry zombies.
In a soulless world filled with nothing but pain and death, will his determination be enough to see him through to the end?

LEFT ALIVE #2
Awaking to the grim realization that his arm is missing, Charles finds himself in a situation he’s never considered before. He’s no longer alone.

Having saved his life, Lindsay joins him in his effort to reach Florida. Finding what could likely be the last remains of civilization, they are forced to flee from things even worse than the walking dead.

LEFT ALIVE #3
With the loss of Lindsay, Charles clings to his humanity by a thread of little more than desperation. With vengeance in his heart, he takes the fight to the zealots.

Fleeing Atlanta, he is haunted by his past and the memories of those he has loved. Injured and close to death, he seeks out the only remaining thing dear to him—his daughters.

LEFT ALIVE #4
With Charles’ fated arrival, the lives of his daughters is in upheaval. Torn between thinking him a madman—a victim of the current world, or their father—having come to rescue them, Lexi and Valerie are forced to decide upon what to do. With their security, their way of live, and their survival on the line, they decide that their father’s dying words were not those of a rambling madman, but the wish and warning of a father. With the name Jason firmly ingrained in their minds, a highway map of the United States with crude markings upon it, and hearts full of determination, they set out into the world to discover just what it was their father died trying to convey to them.

LEFT ALIVE #5
With religious fanatics hot on their trail, Valerie is forced to deliver Lexi’s child in the filthy cab of the truck. Tiny, the child clings to life as they are hunted relentlessly. Finding themselves caught between the living murderers and the starving undead, a member of their small party must be sacrificed in order for the others to survive.

LEFT ALIVE #6
Val, Lexi, Greg, and little Charlie are all that are left. Having lost as many members of their little party that now remain, the trio are forced to struggle on their own; injured, starving, dehydrated, and delirious.
With no other options, they are forced to take life-altering chances in an effort to find the elusive Jason, and hopefully with him, a way to save mankind.
show less
Format: Kindle Edition
ASIN: B00MBLWCCU
Publish date: 2014-07-31
Publisher: Dark Sable Publishing
Pages no: 448
Edition language: English