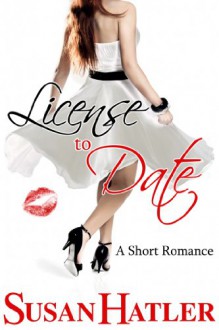 4.17 60
(Better Date than Never series, Book #6) After discovering her fiancé cheated on her, Kaitlin is focused on two things: remodeling her new home and avoiding men at all costs. But her friends insist she get back in the driver’s seat and date again. They strike a hard bargain and agree to paint... show more
(Better Date than Never series, Book #6)

After discovering her fiancé cheated on her, Kaitlin is focused on two things: remodeling her new home and avoiding men at all costs. But her friends insist she get back in the driver’s seat and date again. They strike a hard bargain and agree to paint her house if she goes on five dates.

Anxious to get the paint job started, Kaitlin schedules five dates in five days, but her plan falls to pieces when a sexy bartender at her venue-of-choice makes her swoon. Even though he observes each of the dates from afar, she can’t help but want him to come a little closer.

The last person she should fall for is a mysterious bartender with a sinful smile, but Paul makes her want to take risks again. Will the charming man with electric blue eyes break her heart or will he prove to her that a license to date is what makes life worth the drive?
show less
Format: kindle
ASIN: B00HVFAY1M
Publish date: January 14th 2014
Publisher: Hatco, Inc.
Pages no: 120
Edition language: English
Category:
Romance, Contemporary Romance, Contemporary, Womens Fiction, Chick Lit
Series: Better Date Than Never (#6)

5 years ago
http://RachelGoodbyeBorders.booklikes.com Rachel's books 4.0 License to Date
text License to Date
This was laugh-out loud funny! Kaitlin was a hoot! Paul was sweet. I thought the writing was sassy and really appreciated the humor
See review

Shaykitteh's World of Books rated it

6 years ago
http://shayanaeliza.booklikes.com Shaykitteh's World of Books 5.0 Review: License to Date
text Review: License to Date
This book is like candy... it's sweet and makes me happy, and it's short so didn't take too long to read, while still managing to develop the main characters enough so that I actually liked them. License to Date is the sixth book in Susan's Hatler's "Better Date than Never" series, but can be read a...
See review

6 years ago
http://2kasmom.booklikes.com Kitty's Book Spot! 5.0 Dating, who needs it?
text Dating, who needs it?
Kaitlin was heartbroken by a fiance who cheated on her, with her sister. She meets Paul number 2 - at the bar of her favorite martini. The name aside, his bright blue eyes make her insides melt and she thinks about kissing him. Paul, has moved back to Sacramento after his father died. He is try...
See review

6 years ago
http://dilemma.booklikes.com the dilemma of reading 3.5 License to Date/Susan Halter
text License to Date/Susan Halter
This was a really cute story that was easy to read and generally optimistic. It delivers just what it promises to. I read it in a night and was easily engaged.Kaitlin is a very relatable character and I slipped into her story easily. Her ex-fiance had cheated on her, causing her to become very cynic...
See review

6 years ago
http://cassandrareads.booklikes.com Cassandra Reads 4.0 License to Date [Susan Hatler]
text License to Date [Susan Hatler]
I think this book is longer then the others in the series. Maybe it's just longer then the last few books. There's a big reveal about Paul (who isn't really who he says he is). I figured out who he was long before we get to that point, and I won't spoil too much by saying who he is. He never li...
See review
see community reviews