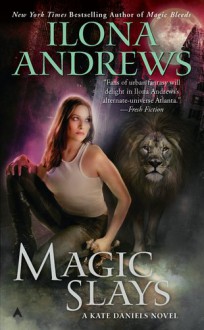 Kate Daniels may have quit the Order of Merciful Aid, but she’s still knee-deep in paranormal problems. Or she would be if she could get someone to hire her. Starting her own business has been more challenging than she thought it would be—now that the Order is disparaging her good name, and many potential clients are afraid of getting on the bad side of the Beast Lord, who just happens to be Kate’s mate.

So when Atlanta’s premier Master of the Dead calls to ask for help with a vampire on the loose, Kate leaps at the chance of some paying work. Turns out this is not an isolated incident, and Kate needs to get to the bottom of it—fast, or the city and everyone dear to her might pay the ultimate price . . .
show less
Format: mass market paperback
ISBN: 9780441020423 (0441020429)
Publish date: 2011-05-31
Publisher: Ace
Pages no: 308
Edition language: English
Category:
Paranormal, Urban Fantasy
Series: Kate Daniels (#5)

5 years ago
http://angelsgp.booklikes.com Angel's Guilty Pleasures 5.0 Magic Slays
text Magic Slays
Note: This series does need to be read in order!~ 5 Magic Slays Stars ~(Possible Spoilers Of Previous Books Ahead) - tried to keep it minimal Another winner in the Kate Daniels series. WOW just WOW!Magic Slays brings us a new threat that threatens the very fabric of magic, alliances will be made, pe...
See review

5 years ago
http://MangaManiacCafe.booklikes.com Manga Maniac Cafe 4.0 Magic Slays
text Magic Slays
4.5 starsMay Contain SpoilersThis volume of the Kate Daniels series started with a huge bang. After a navigator loses control of a vampire, Kate has to head off a blood-thirsty vampire before it wreaks havoc near her office. This adventure will seem tame after she’s hired by the Red Guard to locate ...
See review

5 years ago
http://alyssaarch.booklikes.com Purple People Readers 5.0 Book Review: Magic Slays by Ilona Andrews
text Book Review: Magic Slays by Ilona Andrews
I always worry when a series goes longer than four books. In my experience, very few can go past that point and still keep the magic that made the first books so incredible. Characters lose their edge, relationships lose their spark, and the plot runs around in circles. This series definitely does...
See review

6 years ago
http://carolesrandomlife.booklikes.com carolesrandomlife 5.0 Magic Slays
text Magic Slays
This review can also be found at Carole's Random Life.Anyone who has followed my reviews knows that I am in love with this series. Seriously....it is just the best. I loved this book when I read it over 4 years ago and I loved it during this re-read. I probably liked it even more the second time ...
See review

6 years ago
http://Zanahoria.booklikes.com The better to see you, my dear 3.5 All the races, unite!
text All the races, unite!
I had this one and the seventh install mixed up a bit in my head. I guess I went through them in a spree last time too. The dialogues on inhumanity, rage, us vs them mentality were awesome, starting with Gasthek's reasons for the Witch Trial's chains, down to Doolitle's soliloquy Kate's and Curran...
See review
see community reviews