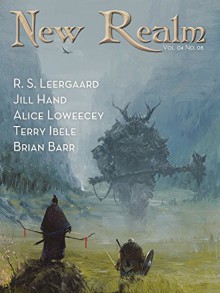 4.00 5
Contents The One - R. S. Leergaard: One who thinks he's the One disrupts the search for the true One. R. S. Leergaard is a fantasy writer who occasionally forays into soft science fiction. He has had one short story, “A Muse to Amuse,” published by Quantum Muse in 2005, and has recently sold a... show more
Contents

The One - R. S. Leergaard: One who thinks he's the One disrupts the search for the true One.

R. S. Leergaard is a fantasy writer who occasionally forays into soft science fiction. He has had one short story, “A Muse to Amuse,” published by Quantum Muse in 2005, and has recently sold a Book of Xyxyx story, Genassist, to Smoking Pen Press. A sampling of R. S. Leergaard's stories can be found at https://www.wattpad.com/user/RSLeergaard

Wurm - Jill Hand: An unscrupulous dragon's assistant gets a surprise when his employer decides to do battle with a knight.

Jill Hand is the author of The Blue Horse, a science fiction/fantasy novella based on a true story available from Kellan Publishing. Her work has appeared in several anthologies, among them Urban Temples of Cthulhu. Most recently her work has appeared in Another Realm, Dark Gothic Resurrected, Heater, Jersey Devil Press, Nebula Rift, and The Sirens Call, among others.

A Trail of Breadcrumbs - Alice Loweecey: One kickass bounty hunter plus one egotistical magician fighting crime—when the alternate world collisions don't get in their way.

Godswap Apocalypse - Terry Ibele: George wakes up with all of God's powers, but has only figured out how to end the world.

Terry Ibele resides in Ontario, Canada where he lives off a steady diet of frolicking in the woods, being stuck in transit, and pizza. After receiving a degree in business, Terry spent a few years in analytics and now works as a content marketer for a software company. When he's not caught up in the endless rat race (coincidentally, he has two pet rats), you can find him typing away in his tiny apartment, imagining up quirky characters and extraordinary settings. Terry's fantasy and science fiction stories appear in various online magazines and on his site, terryibele.com.

The Shadow Ward: A Carolina Daemonic Story - Brian Barr: A summoned magical being composed of shadow and lightning hunts a thief in order to please his master.

5 years ago
http://rsleergaard.booklikes.com Book reviews by: R. S. Leergaard 4.0 New Realm Vol. 04 No. 08
text New Realm Vol. 04 No. 08
New Realm is one of several monthly magazines published by FictionMagazines.com, usually featuring five short fantasy stories from five different authors. # Story #1 – The One by R. S. Leergaard For fairly obvious reasons, at least to me, I won't be reviewing/critiquing the first story because it's ...
See review
see community reviews

The End: An Apocalyptic Anthology - Roma...

The Story Of The Scottish Daily News - R...

Hell on the High Seas: A Carolina Daemon...

The End: An Apocalyptic Anthology - Roma...