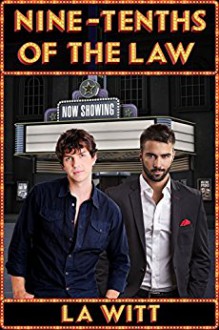 Nine-Tenths of the Law
by: L.A. Witt (author)

The stranger’s accusation throws Zach Owens for a loop. He’s never seen this man in his life, and he’s not prepared when he finds out what they have in common—their boyfriend, Jake.

Make that ex-boyfriend. With the jerk out of the picture, Zach hurries after the stranger to apologize… which quickly leads to some sizzling hot revenge sex.

Despite starting on the wrong foot, Nathan Forrester can’t get enough of the sexy movie theater owner. Still, he’s jaded and distrustful—especially when Jake keeps materializing in Zach’s presence despite Zach insisting that relationship is over.

With a devious ex-boyfriend trying to sabotage their fledgling relationship, Zach and Nathan need to learn to trust each other, or they’ll both wind up with nothing.

6 years ago
http://debbieattenborough.booklikes.com debbiereadsbook 5.0 love love LOVE this book!
text love love LOVE this book!
Independent reviewer for Archaeolibrarian I was gifted my copy of this book. When the stranger tells Zach he has something of his, he never expected that something to be his boyfriend, Jake. But Jake was Nathan's boyfriend too. Chasing after Nathan wasn't supposed to lead to revenge sex but it did. ...
See review

8 years ago
http://kimosumiko.booklikes.com kimosumiko 1.5 Nine-Tenths of the Law
text Nine-Tenths of the Law
1.5 stars this book made me angryI thought this would be a simple "meh" read, but that was apparently hoping for too much.This started off pretty well and I'd been enjoying it quite a bit, but it doesn't take long before my care level started to slip. I wanted to like this more, I really did, but th...
See review

9 years ago
http://Breann.booklikes.com Breann 2.0
text
This review might be redundant, as is this book.Like other reviewers, I liked the premise. The meeting of Nathan and Zach was different and made for an interesting start. They had some great chemistry which made for some hot smexin. Like other reviewers, that’s kind of where my likes stopped and the...
See review

10 years ago
http://SandraM.booklikes.com Sandra 2.0
text
Well, that wasn't bad... but it certainly wasn't good. I just could not give one shit, let alone two. The sex was constant and redundant. The "angsty" lack of trust issue was boring and also redundant. And I dunno if we were supposed to think this was a HEA but to me it felt like a HFN that ende...
See review

10 years ago
http://vivian01.booklikes.com No Glitter Blown 3.0 Nine-tenths of the Law
text Nine-tenths of the Law
Can you ever get sweet water from a poisoned well?Seriously, how do you find purity when you started with something tainted. Mistrust and betrayal, two demons of relationship hound Nathan and Zach. Due to an inauspicious start the entire journey is uphill with a lot of sliding backwards on unstable ...
See review
see community reviews