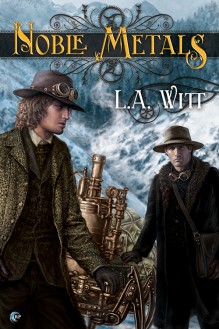 Dr. John Fauth is only searching for one thing, and it isn’t gold. He needs platinum for the prototypes of his revolutionary inventions, and if he doesn’t find it in the Klondike, his university career—and his research—is over.

Getting to the Klondike is a grueling, dangerous journey, and just hours after leaving Seattle, John and Robert find themselves in over their heads. John is carrying an invaluable device that his competitors will do anything to get their hands on. And as the cold nights and mutual desire pull John and Robert closer together, they discover that they have much more to lose than gold or platinum.

(Publisher's Note: This book was previously published by a different press; it has since been edited extensively and expanded by over 10,000 words.)

6 years ago
http://brooklynstorms.booklikes.com B3 - Brooklyn's Book Bites 4.0 Noble Metals
text Noble Metals
This was surprisingly good. I was a bit wary. I'm not a fan of historical, although steampunk does interest me somewhat. But this one was fun. The whole Gold Rush aspect and John's device helped me overlook the historical part of it.
See review

6 years ago
http://Evaine.booklikes.com Evaine's Books, Books and More Books 2.5 Noble Metals by L.A. Witt - My Thoughts
text Noble Metals by L.A. Witt - My Thoughts
That was disappointing. :( This is a book that I had marked for a long time to buy because I generally enjoy the author and I had been wanting to discover steampunk. Unfortunately, it had been pulled from the original publisher and was in the process of being added to and re-issued by the author....
See review

6 years ago
http://tnareviews.booklikes.com The Novel Approach Reviews 5.0 Noble Metals
text Noble Metals
This is a 4.5 star reviewI read L.A. Witt’s Noble Metals when it was originally published back in 2012, and liked it a lot. The imagination that went into the storytelling was a great blend of historical and technological, which is why Steampunk is one of my favorite sub-genres of fantasy. It also d...
See review
see community reviews