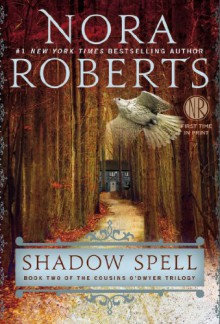 Meara Quinn is Branna’s best friend, a sister in all but blood. Her and Connor’s paths cross almost daily, as Connor takes tourists on hawk walks and Meara guides them on horseback across the lush countryside. She has the eyes of a gypsy and the body of a goddessthings Connor has always taken for granteduntil his brush with death propels them into a quick, hot tangle. Plenty of women have found their way to Connor’s bed, but none to his heart until now. Frustratingly, Meara is okay with just the heat, afraid to lose herself – and their friendship – to something more.

But soon, Connor will see the full force and fury of what runs in his blood. And he will need his family and friends around him when his past rolls in like the fog, threatening an end to all he loves.
show less
Format: paperback
ISBN: 9780425259863 (0425259862)
ASIN: 425259862
Publish date: 25-3-2014
Publisher: Berkley Trade
Pages no: 352
Edition language: English
Category:
Paranormal, Romance, Paranormal Romance, Mystery, Contemporary Romance, Contemporary
Series: The Cousins O'Dwyer Trilogy (#2)

2 years ago
http://thebookgourmet.booklikes.com The Book Gourmet 3.5 Shadow Spell by Nora Roberts
text Shadow Spell by Nora Roberts
They've known each other since they were children, but they were always only friends. Then, one night after his near brush with death, things change with a sizzling kiss, and their friendship evolves, strengthening the circle against evil... The evil Cabhan still isn't vanquished (that's why it's ...
See review

4 years ago
http://stellarraven.booklikes.com Jennifer's Books 3.5 Shadow Spell
text Shadow Spell
I liked this one more than the first in the series, mainly because I felt more invested in the romance between this book's lead characters, Connor and Meara. And since I feel equally invested in the relationship between the lead characters in the final book of the trilogy, I will be finishing the se...
See review

4 years ago
http://mollysmommyreads.booklikes.com mollysmommyreads 4.0 Shadow Spell
text Shadow Spell
It's been years since I read anything by Nora Roberts and I had forgotten how swept up in her stories I always get. Even when I know each story follows the same formula... girl meets boy, girl falls in love with boy, boy and girl have misunderstanding, boy and girl end up living happily ever after.....
See review

5 years ago
http://cassandrareads.booklikes.com Cassandra Reads 4.0 Review: Shadow Spell by Nora Roberts
text Review: Shadow Spell by Nora Roberts
This one is a little lighter on the romance and the romance related drama then Dark Witch. Conner and Meara have known each other for years. She's his sister's, Branna, best friend and works with Iona (Conner's cousin). Meara does have commitment issues (her father left her mother, although it's not...
See review