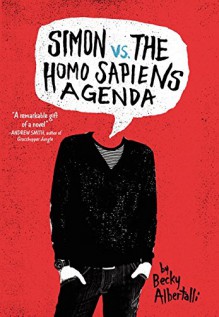 Simon vs. the Homo Sapiens Agenda
by: Becky Albertalli (author)

2 years ago
http://VeeBookish.booklikes.com @Vee_Bookish 5.0
text
This was so freaking cute, and heartwarming, and everything I needed to distract myself from the current pandemic. I need to read it 6 more times and actually buy a copy, because the one I read was snagged from the library right before it shut down for the foreseeable future.
See review

4 years ago
http://PaperSoul.booklikes.com Paper Soul 4.0 Simon Says Part 1
text Simon Says Part 1
What if you had a secret and it defined your whole being? What if someone was blackmailing you with that secret to get closer to a friend? What if you were in love with someone you have never met? What would you do to keep that relationship? So I have to admit I watched the movie first before rea...
See review

4 years ago
http://oblue.booklikes.com Abandoned by Booklikes 4.0 Great Look at LGBT Teens
text Great Look at LGBT Teens
I really enjoyed "Simon Vs. The Homo Sapiens Agenda." Even though it was short, Albertalli did a great job of making all of the characters in this story feel like three dimensional characters. The only reason why I didn't give this story five stars is that Simon's love interest is of a race that oft...
See review
see community reviews