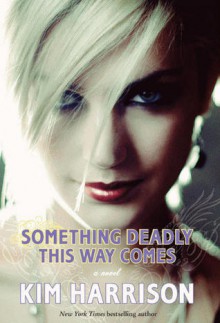 Something Deadly This Way Comes
by: Kim Harrison (author)

When Madison died the night of her prom, she knew her life would never be the same. Now she has a powerful amulet, a team of rogue angels by her side, and the ability to flash forward into the future to see the shape of destiny. And of course, now she's finally with Josh—a perfect boyfriend who doesn't even mind that she's dead.

But being dead has its disadvantages, too. Madison feels caught between the light and the dark, and between her real life and her timekeeper status. When Madison has the opportunity to get her body back—to be alive again—she faces her most difficult decision yet. If she claims it, she could return to being a normal girl—and have a chance at a real relationship with Josh. But would having the one thing she wants most in the world also mean giving up everything she's worked so hard for?
show less
Format: hardcover
ISBN: 9780061718199 (006171819X)
Publish date: 2011-05-24
Publisher: HarperCollins
Pages no: 245
Edition language: English
Category:
Fantasy, Young Adult, Paranormal, Urban Fantasy, Paranormal Romance, Supernatural
Series: Madison Avery Trilogy (#3)

9 years ago
http://Jennavier.booklikes.com Jennavier 4.0
text
A great ending. The world didn't hold up to the third book of scrutiny but I still appreciate it for being a unique take on a troped up sub-genre. I loved Madison and it was cool watching how the choices she made affected not just herself, but others. It was very done but I'm kind of sad it's over.
See review

9 years ago
http://nomore.booklikes.com No More Booklikes, BYE 3.0
text
2.5 I tried, I wanted to like it, I wanted to support one of my favorite authors. But the main character Madison, was too immature, too selfish, got my ;last nerve twitching. I just couldn't get past my dislike of her to enjoy the story. It is a shame , I liked the side characters and the plot was i...
See review