Log in with Facebook
or
Wrong email address or username
Sign up
Already on BookLikes? Log in!
Incorrect verification code
Please, check your email, the code to access your BookLikes blog was sent to you already.
Enter code:
« Back Send
back to top
Search tags: 2015-Audiobook-Challenge Morningside Fall: Legends of the Duskwalker

I am OCD about reading books in order….so I picked up Three to listen to first before starting this Morningside Fall, and I’m still reeling a bit from it, Three was an awesome listen……This second installment….not sure if it because I started it right after the first book and the loss of Three is still so fresh in my mind…but story wise this book was just not as good as the first one. While I really liked Wren in the first book, in this one he was just okay….maybe it is the whole second book syndrome that so many series have……The story seemed to drag quite a bit but did pick up towards the last couple of hours. The story was not bad, just not as good as the first….the characters of Morningside Falls are really what bring this book together and keep you reading/listening…..the world building is great and we find out more about the threat of the Weir….there is not much more I can say without getting spoilery. I’m taking a short break from this so I don’t burn out and will then be jumping into the third book.
As always, Luke Daniels did an amazing job on the narration….he is one of my favorite narrators and the reason I wanted to try this series…..so narration on this is a solid 5 stars.

So go and listen….while not as great as the first book, it is still good and the narration is fabulous...

Audiobook provided by Author/Publisher via Audiobookreviewer.com for an honest review This audiobook was provided by the author, narrator, or publisher at no cost in exchange for an unbiased review courtesy of AudiobookBlast dot com

I really enjoyed this story, there were parts where Nevvie drove me crazy….like  why she stayed with Alex for so long….I just don’t understand why some people put up with being treated so horribly…..but we do get to see Nevvie grow into a stronger person by the end of the book.  Nevvie and her boy’s are a bit broken and by the end they each play a big part in healing the wounds they each have carried for so long.

Tymber Dalton writes some of the best ménage books I have ever read, for me it is because of her character development, you really get to know the characters in her stories (her Coffeeshop Coven series is one of my favorites)

Sierra Kline is a new to me narrator and I thought she did a great job with the voices and the accents for both Tyler and Thomas. I would try other books that she narrates. 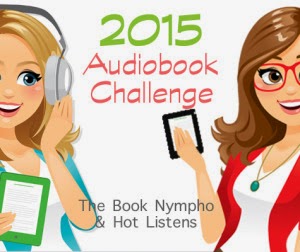 Well, the 2015 Audiobook Challenge is over and it's time to wrap it up. I feel good about what I listened to this year, though I would have liked to have reviewed more of them. *hangs head in shame* (Looks like its a good thing I signed up for the 2016 Blogger Shame Challenge.)

I am feeling great that I managed to spank my chosen level and even made the next one, Marathoner (Look Ma No Hands) 50+, my be-otch. Whoots for me!! And this year ain't officially over yet, so I may be able to sneak a few more on the list.  And you know I will right?

Titles:
Just a few more books lined up for the end of the year, including: Weird Girls #2 by Cecy Robson, UDA #3 by Hannah Jayne and Yappy Hour by Diana Orgain. This is a post-apocalyptic and a fantasy story all in one. The year is 5271 and the world as we know it has been destroyed by nuclear war and while the human race has survived it is more like medieval times, with castles, keeps, Kings, Queens and High Kings. Men are stronger and women can do magic. The radiation has caused many changes in plants and animals of the world. I’m having a hard time coming up with anything more descriptive without giving spoilers, while a bit frustrating, learning as the characters do makes the story more compelling (at least to me it does).

I enjoyed this story, even though at times it seemed to drag a bit, it kept my interest. The world building was good and you did not have a big info dump at the beginning, information is doled out as the story progresses. While not the same, the theme of this story reminded me a lot of The Golden Compass/His Dark Materials series….different worlds, ages but the theme of Good versus Evil and an young man and woman journeying together to fight it….an oversimplification of the plot but you get the idea. The scary part to me is how this reflects so much of what is going on in the world today. The dark circle wants to conquer and enslave all if Neveah and the Dark Circle of 5271 are from the same terrorist group that launched the nuclear war…they use dark sorceresses to cause strife, disharmony…if they can get the kingdoms of Neveah to go to war with each other, the negative energy from this will make them more powerful.

Helene McCardle does an excellent job narrating, while some of the male characters were not quite as easy to distinguish, all the female characters were very distinct. I do think that this story is one hat would do well as either a graphic novel or just in general a full cast narration.
As usual, the most frustrating part is that the adventure is not yet over but the audio for the next book is not yet available….while I could pick up the e-book, this story really works well as an audio so I will wait to continue until it is out. What I am really liking about this series so far is that it covers so many genres…romance, suspense, urban fantasy, paranormal…..you get a bit of everything.  While it was pretty easy to figure out who the bad guy was…..the “why” was not so easy to figure out.   Victors musings were pretty funny and I liked that he seems to be believing in him and Jacob….I can’t wait to see where they go from here.  There were a lot of   great lines but this one just had me cracking up

"In addition to changing the meds, you'll have to start watching your diet," she said.

I stared at her.

"The USDA modified the food pyramid to reflect their most recent guidelines," she said, as I scrambled to figure out what my diet had to do with being queer. Chance pointed at the pamphlet. "You'll note there's no donut group. And no coffee group either. Limit coffee to one cup a day. Two, at the most."

I looked down at the pamphlet and read the title. My Pyramid Plan : A Guide to Healthy Eating.

Gomez Pugh did a great job with the narration an am looking forward to listening to the next one.

Audiobook was provided by the Author for an honest review.