Log in with Facebook
or
Wrong email address or username
Sign up
Already on BookLikes? Log in!
Incorrect verification code
Please, check your email, the code to access your BookLikes blog was sent to you already.
Enter code:
« Back Send
back to top
Search tags: Haunted-Houses 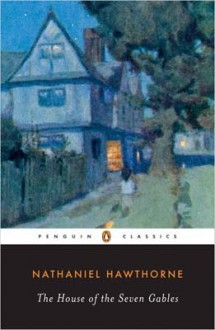 Another Classic ticked off my list. This one was written in 1851 and very definitely has the tone of that era of writing. Very verbose and slow moving, with no real interaction between characters.

The story is more about the house than the people, though it tells the story of several generations, mostly of the Maule and Pyncheon families. One of the Maule ancestors was accused of witchcraft and executed, and the house was taken and ended up in the hands of the Pyncheons, though the Maule relatives were the rightful inheritors.

There is a curse, a crime mystery and two centuries of superstition attached to the house. The plot was interesting, but I found it very slow reading. I never felt really involved with any of the characters because the style of writing kept them impersonal.

Still, I'm glad I read it. I've seen the house when I was on a trip to Boston and Cambridge in Massachusetts and I can see how it would inspire a story. It was actually built for the Turner family in 1668, so the story is completely fiction. This is one for those who really love 19th century stories. 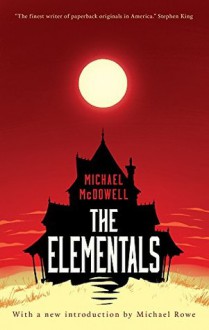 You have to love a Horror story that starts with a funeral. This one had a weird aspect, but that soon got explained in a perfectly plausible manner. The deep south accent comes over easily and actually helped transport me from reality into this alternate southern world.

I found the author's voice engaging and didn't mind a slow build up in the beginning. A southern family have two holiday homes in a place called Beldame which consists of three houses on a beach with sand dunes. The third house is unoccupied and no one is sure who owns it, but it is getting slowly buried in a sand dune.

13-year-old India gets curious about the place and notices that her father, uncle and grandmother are afraid of the third house. They warn her about the more practical dangers of sand dunes and structurally unsound properties, but her driving curiosity makes her keep looking through the windows and photographing things. Things start to get a little strange.

This is well written and the characters are distinctive. The plot builds slowly, revealing inter-family relationships and how they've developed over time. Towards the end everything that has been experienced in the third house comes out and the action goes berserk, leading to a breathtaking conclusion.

There was a time or two when someone didn't see something obvious, but otherwise it was believable as far as anything involving supernatural activity can be believable and definitely had some chills and tension to satisfy the Horror enthusiast. 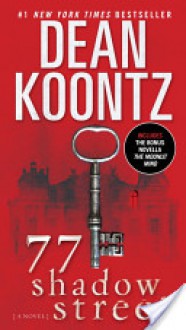 I don't even know what to say. I was tempted to DNF but I really wanted something to get crossed off of my second bingo card so struggled through to the end with this one.

I don't know guys, I think that Koontz has flashes of brilliance in his books, but his later stuff is just him preaching via his characters about whatever he currently has a bug about. This one is just about how advances in technology can lead to the world being wiped out via our scientific advances.

I will say the initial part of the book (the horrific events that occurred at a Gilded Age home over the years) was great. When Koontz got into the characters and dialogue it just fell apart. What's wrong with just writing a straight haunted house mystery? I don't know why Koontz went from that to what this turned into.

"77 Shadow Street" follows a former home eventually turned into condos that every 37 or maybe it was 38 years an event occurs there that leaves all of the inhabitants dead. Now it's about to go through its cycle again. Now called the Pendleton, it is a home for it seems fairly well off people.

I don't know what to say about the characters. We have a former Marine (of course we do) who is now an investment banker of some sort. Two elderly rich sisters leaving together, a former U.S. Senator, a country music writer and her son, and a woman and her autistic daughter. There is also a retired lawyer, a scientist, and shoot I know I am blanking on at least 4 more people here, but I can't even recall people's names at this point.

I can't even point to a favorite character since we spend so little time with everyone. You maybe get a paragraph or two before Koontz blithely skips to the next character. We also get an info dump via the retired attorney about the history of the Pendleton. I really hate info dumps and this one made no sense to me since who moves into a place where it seems murders keeps happening?

If Koontz could have limited himself to a first person POV and just had that character introduce us to the other characters it could have worked. When I started reading the one kid's point of view I was just over everything. It doesn't help that we get some bad science via characters too when the happenings at the Pendleton start getting explained.

Readers quickly find out though that Shadow Street is not what it seems. It appears to also connect to a man calling himself "Witness" and a narrator calling themselves "The One." It takes a while for all of this to sync up so you can figure out what is going on. However, the reveal to me was disappointing.

The flow started off okay and than just got increasingly worse. The writing was atrocious (dialogue wise) too. I just kept going to myself, who the heck talks like this while I was reading. Everyone sounded like a bad fortune cookie. At one point I thought I was reading an Odd Thomas book since everyone in this book managed to sound like that character at one point or the other.

The setting of the Pendleton at first was creepy. But when things got explained I found myself in disbelief about how this all got explained. It was overly explained and I called BS on what actions one of the characters did. I think it would have caused some paradox consequences, but I really didn't care at that point cause at least I had finished this book.

FYI, I skipped reading the novella included since it was a prequel of "77 Shadow Street" called "The Moonlit Mind" and honestly should have maybe been put up front before you get into the longer book. Either way, I was glad to be done and refused to read that. This book ended around the 75 percent mark because of my skipping that read.

There were a couple of good ideas here before Koontz ruined it. Way too many characters, once again with his constant refrain on how evil science is, a golden retriever pops up in the end. I do wish that Koontz had his characters speak like real human beings again. Seriously, most of the time I kept thinking was reading an Odd Thomas book.

Since becoming a professional, Mickey never killed a man for free. It was unnatural. Like Picasso giving away a painting. An important part of the sensual experience of murder was counting the money afterward.

One day I'll go back and count the number of professional killers Koontz had in his novels.