Log in with Facebook
or
Wrong email address or username
Sign up
Already on BookLikes? Log in!
Incorrect verification code
Please, check your email, the code to access your BookLikes blog was sent to you already.
Enter code:
« Back Send
back to top
Search tags: Invisible-Monsters 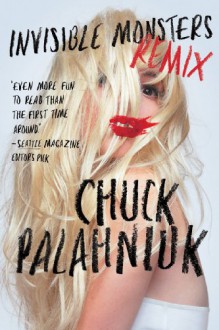 All right, review time. Apologies if parts of this are fuzzy. The weather's gotten warmer, plants are starting to bloom, and my allergies are acting up which means I'm all doped up on Benadryl right now.

For those of you who don't know, Invisible Monsters is about a fashion model, who I'll be referring to as Daisy in this review, who is horribly disfigured and left mute after an accident. She then meets Brandy Alexander and travels with her, learning that nothing is as it seems. The biggest difference between the remix and the original is the chapters in the remix are out of order. There's also a few extra chapters as well.

I read Invisible Monsters because it was highly recommended to me by several of the blogs I follow. To you who recommended it, I say a sincere thank you! This book was twisted, it was funny, and I enjoyed every minute of it.

The plot itself didn't feel like much of a plot. Instead it felt like a bunch of backstory to add up to one key event, that being the chaos that is Evie's wedding. I wouldn't think a plot style like this could work but it does. It works so well. I loved putting together the pieces and seeing how we end up with total disaster.

The characters were all likable as well. You don't really know much about them when the story first begins, but all the information builds up on itself until by the end you get a complete picture. All of them were unique. Not one was a character type I had seen before. They were all refreshing. Brandy was easily my favorite. She was larger than life in so many ways and I enjoyed her eccentricity. I picture my favorite substitute from high school, the one who made the "eating a brick" comment, playing her in a movie. Which is kind of odd because they don't look that much alike. Oh well.

The best part of this book by far was the way it twisted. There were so many plot twists I did not see coming, such as how Brandy, Daisy, and Manus were all connected to each other. Each time a new twist was revealed, my stomach dropped and I was just like, "What?!" I even though I caught a few of the surprises. As soon as Daisy made it known that Evie and Manus were doing the nasty, I knew Evie had shot her. I had that twist figured out miles ahead. Except I didn't. When it was revealed who really shot Daisy, all I could do was stare at the book and say, "What the shit?" The twists are amazing. This book is like riding a roller coaster and it is so much fun.

The format of the remix was a lot of fun. I had know idea when I would reach the end (thus why I ended up finishing it before work) and in that sense the book imitated life wonderfully. I think that was one of Palahniuk's goals, if I remember correctly. The book felt like life, and I think that's part of what makes it so enjoyable. It's real, even though the situations are somewhat farfetched.

That all said, if you're someone who doesn't want to work for your literature, I recommend sticking with the original version. As mentioned I lost my bookmark and I had to flip through the whole book and reread chapters to find my place again. There's also a lot of flipping back and forth involved. If you want your read to be more relaxing, definitely just stick with the original.

The only thing I didn't care for about the book, and thus why I docked half a star, is I felt disconnected for the majority of it. It wasn't that I didn't enjoy it. I did very much so enjoy it from the beginning. But I just didn't find myself caring. I wanted to finish, I just didn't really care where I ended up. I think this is because it does take a while to get to know the characters. So I didn't really have much to connect to until I was well into the story. I wish I could have had that connection sooner on.

I also wish maybe a little less time was spent in Daisy's first days in the hospital. That section dragged a little for me.

Overall this is a great book. I'd read it again easily. Kind of reminds me of a Coen Brothers movie. I read online they were thinking of adapting it. If that's the case, I think I'd want them to do so.

I finished this about two minutes ago. It was fantastic! Unfortunately I also need to leave for work. I'll write a proper review when I get home. Here's a preview of what's to come.

- Didn't see most of the twists coming and loved that.

- Brandy Alexander reminds me of my favorite substitute from high school.

- Still was pretty disconnected until the last couple of chapters.

- This is a hard book to find your place after you've lost your bookmark in.

Well, no one swooped down and was like, "DON'T READ THIS BOOK", so I'm assuming it's just as good, if not better than the original. Besides, I already started reading it and am sucked in so I can't stop now.

I like that this is gonna be a nonlinear, chase the page number kind of read. It makes for a bit of a workout. It will make it hard to keep track of my progress though, since I'll have to do math to figure out how many pages I've actually read. 20 is just a placeholder guess. So I guess I'll just finish it when I finish it.

So far I really like his style. There are a lot of witty one liners, the kind I'd make my Facebook status if I felt so inclined. I might share a few of my favorites on here too. Only concern I have so far about the style were there is something about it that creates a slight disconnect. Like, I can't completely get sucked in. I'm not sure what's causing it and it could disappear once I get further into the story. So we'll see.

I'm excited for this one.

So, I stopped by my local library and they had a copy of the much recommended to me Invisible Monsters. Well, Invisible Monsters Remix. Is there a crucial difference between the two? Like, is the original incredibly better and therefore I should wait until the library has it or is the Remix just as good/if not better? Just want to know where a good starting point would be.

I went ahead and checked it out already, just seeing if return trip to the library is in order. 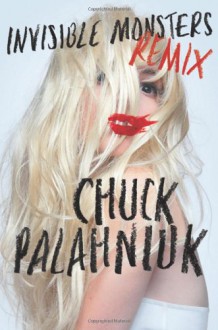 Uhm. This is going to be hard to write.

First of all, I feel too old. I mean I think I would have enjoyed this book a couple of years back, I would have really praised it and become a fan of Palahniuk for the rest of my days. I guess? Looking at my younger self, I think I would have. Maybe there is some kind of deep meaning or next level perspective I am missing now, though. It could be. But no, I can't put more than 2 stars.

Second, I am not discouraging you from reading it, but pay attention it comes with a HUGE, MASSIVE trigger warning. Warning of pretty much everything, really. It is probably the ugliest narrative I have read, and this is from someone who read American Psycho as a teenager.

It has been a long road, as I saw I started reading in... June last year. Oops. I could just not focus in what I was reading: the kind of structure (the protagonist/narrator jumps back and forth with little care) and the amount of, for me, useless data (so many medicine/drugs names) made it difficult for someone who lately has a hard time concentrating. So I put it aside until recently, when it became easier to follow and hook me enough to go quicker and quicker.

My problem with it is: I couldn't care for anyone in the story. If I can't do that, I don't enjoy it. I mean, I can take ugly if I care for at least one character and/or love the way it is written. But I found it too eccentric even for my taste. And PROBLEMATIC. Widely problematic. Every non-usual representation in this book was awfully done. This hurts me and I can't stand it. I know this does not necessarily mean that the author himself is problematic and more that he wants to point out how society mistreats for example lgtbq+ people but the whole picture throughout the book seemed to mock trans and homo/pansexual people. I'm not saying any further because it is somehow spoiler-y, but yeah. I experienced even nausea in some parts.

There are some pretty good quotes though; and I think I can see the initial purpose for this book. But as I said, it was all blurred by the ugliness.