Log in with Facebook
or
Wrong email address or username
Sign up
Already on BookLikes? Log in!
Incorrect verification code
Please, check your email, the code to access your BookLikes blog was sent to you already.
Enter code:
« Back Send
back to top
Search tags: Jennifer-Brown 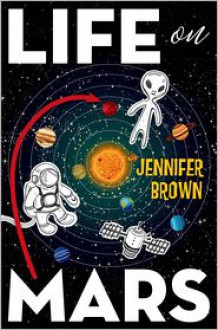 I was looking for a story to read my youngest when I stumbled upon Life on Mars. I'm not much for juvenile lit; I am selective. I have the same overall expectations for juvenile stories as I do for adult literature. Too often, I'm disappointed, as most children's stories are plot heavy, and I tire from stories that depend on plot. Life on Mars sounded promising, and to its credit, it served up a tale that focused as much on character development as it did moving the story forward. But there were some surprises, good and bad.

The good is that this story does not shy away from being real. In the beginning, it's easy to imagine how things will work out for young Arcturus (Arty), a child who has clearly never experienced much adversity. Up against a move that will forever “ruin his life,” Arty is in a position and a genre where you know that even if events don't go as he hopes, they'll work out for the best. And it feels like this is going to be the story for quite some time, but then Jennifer Brown throws the story into an unexpected direction. She piles the burden on. These are the kind of variations that can help a children's story rise above the rest.

Also wonderful are the characters themselves. Yes, they're a bit dimensionally thin, but they're well crafted. Aside from Cash, not much is really revealed about any of the characters. Vega obsesses over her boyfriend, who eats and speaks in monosyllables. Cassi has let her new love of cheerleading overshadow her appreciation for astronomy. Priya is the cute Indian girl next door. And Tripp trips. But they’re wonderful characters for a middle-grade novel with dialogue that matches each.

What didn't work so well throughout Life on Mars, something else I hadn’t expected, was the saccharine laden details of the story. In an attempt to make every pun possible about space, the novel dips too often into little witticisms that are lost on small children, and not all that funny to those who understand. The fact that this family names all their offspring after stars is cloying. Are we really to believe that every sibling and every cousin for at least three generations is on board with this space obsession? Highly unlikely. Also grating was all the childish talk of zombies and all that. If they’re kidding around, sure, it works. But I got the impression that Arty was genuinely scared, especially when he was without his friends, so for all his thoughts about brain-eaters, I was annoyed. Children’s books do not have to be so juvenile.

Okay, I admit it. I’m an old fart. So what? I still liked the novel. I just wish it hadn't been quite so... childish, at times. For being childish, however, this is a children's book with some maturity. 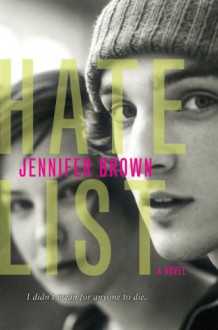 "Pretty isn't everything, but sometimes ugly is."

Val & Nick are getting bullied at school and both have difficult home lives. Val creates a notebook with a "hate list." They add to it all the names of kids who bully them, and all the others in their lives that make them miserable. Val and Nick are both angry, but Val doesn't realize how angry and disturbed Nick is, until it's too late. How is she supposed to move past this and "get on with her life" like all the adults want her to?

Warning, this book may have you tearing up at times. It is a difficult read, especially considering the world we live in today. Brown did an amazing job portraying teenagers, the way they think, and the way they feel. So many overpowering emotions. So much Hate. Such a heartbreaking situation.

As difficult as this book was, it drew me in. I listened on audio and put it on every chance I got.

High school students, their parents, and anyone who wants to read a touching YA book. 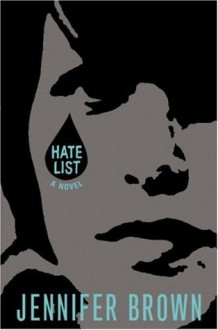 I didn't know how much I would be invested with this book when I started reading it.

I was amazed at how strong Valerie became as the story progressed. Valeria didn't think her notebook that she dubbed the hate list would be part of the reason her boyfriend Nick killed people. The hate list was just that a list of things, subjects and people she hated. The bullies that liked to pick on her and Nick.  We all have a list like that somewhere either written down or in our head but we never act on it. Valeria never wanted to act on it but she had no clue that Nick was going to take things into his own hands.

This is story is the aftermath of the tragedy that hit Valeria's school and how she has to learn that there was nothing she could do to stop Nick. She has to move on with her life and let the past go though she never has to forget it.

I couldn't stand Valeria's parents no matter how hard I tried well until the end. Her mom I understood was in shocked with all that happened but yet she couldn't be there for her child to comfort her. Her dad was a whole other story. There was a question that Val asked her father, "Dad will you ever forgive me" and the answer he gave I was surprised at. I literally sat with my mouth opened like a fish because who gives that answer?

Dr. Hieler I liked him, he didn't sugar coat things with Val but he had her come up with things on her own if that makes sense. He didn't just talk mumbo jumbo with her he coaxed her out of her shell which she needed. He says a quote that I really liked. "Life isn't fair. A fair's a place where you eat corn dogs and ride the Ferris wheel." How true is that to be!

I found myself at tears towards the end when Val is at her graduation with her friend! The one who no matter what people said or thought got to know Val. Stood up for her even when others believed Val was a part of the shooting. The project that was presented to the graduating class is one that I believe everyone needed to move on especially Val and it worked.

There is so much more I can say about this book but I will stop my review here. If you want a read that will have you wondering if a person who had no clue of the horrors that someone she loved would inflict, and to watch her say goodbye but grow at the same time. Give this book a read.

I liked this book. It's about the aftermath of a school shooting, where the shooter was actually the boyfriend of the female protagonist. The book's about her struggles and recovery, and her relationship in general with all the other characters.

Now, that sounds like an awesome theme to use for a book. Like, wow. It's a great idea. I'm just not sure it was implemented very well.

Although I enjoyed most of the characters, and in general this book was very well-written, there are a few flaws in general:

1. Valerie's boyfriend, Nick, is the shooter. She spends the entire book reminiscing about their time together with him and basically painting him in a positive light, thinking how "Nick wasn't really a bad guy" and about how he was pretty romantic, he liked Shakespeare...Look, girl, he SHOT SIX PEOPLE! He's a freaking serial killer! There's a good reason why everyone is trying to tell you he's not someone to be with...Although, I get that she was in love with him and didn't realise his true intentions. There's also no indication about why he started shooting people, but I can live with that.

2. Valerie's parents. Holy shit. They are the most despicable and hateful parents I have ever seen in any book by far! They constantly act as if SHE was the one who shot all those people, as if their daughter is a murderer. Valerie even tries to reach out to her dad for help and support...and he repays her by being fucking abusive and yelling in her face. They're fucking horrible. They shouldn't be allowed to have children...

3. Vaguely useless parts of the story. There was this mysterious woman called Bea who really helped with Valerie's development. Who the hell is Bea? I thought there wold be a plot twist about her...but they never SAY? Who is she?? Also, the reporter near the end, she contributes nothing much. Or Troy threatening Valerie with a gun. He never appears again? I don't mind too much about these points, but...it really seemed pointless.

4. The really fast ending. It was quite tearful and emotional, having the memorial service, and all is forgiven and forgotten...even though her parents are still freaking assholes for treating her like shit. And it ends just there? One chapter? Couldn't we have a bit more closure on that, huh?

Oh well. I think it was a good read overall, but I have read better. I mean, Never Ending is a book which is written much better and has much more emotion and brought real tears to my eyes. Not so much this. 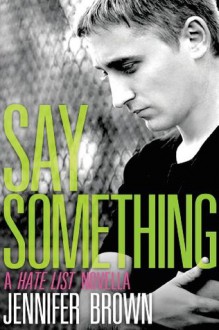 Though this was a very brief read, I still wanted to pick my heart up off the floor after reading "Say Something." David is the main character for this narrative - former friend to Valerie, also suffering from survivor's guilt in the aftermath of the school shooting of their junior year. The narrative flips back and forth between junior and senior year, narrating David's experiences with physical and verbal bullying, being helped in an unexpected place by the absolute last person he thought possible, and struggling between his guilt in silence and being able to "say something." (Interestingly enough, I had A Great Big World's "Say Something" running through my head as I read this novella.)

I thought this was written with the same maturity and heart as "Hate List", with decent pacing between the past and present. David's range of emotions in the before, during and aftermath of the shooting are palpable. I appreciated the narrative for what it offered, though I'll admit it was over about as soon as it began. It's definitely a narrative I'd recommend reading after "Hate List" to get the full impact and weight of the story.