Log in with Facebook
or
Wrong email address or username
Sign up
Already on BookLikes? Log in!
Incorrect verification code
Please, check your email, the code to access your BookLikes blog was sent to you already.
Enter code:
« Back Send
back to top
Search tags: Mitch-Albom 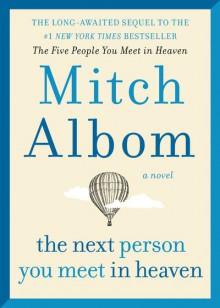 I read The Five People You Meet in Heaven a few years ago. I remember really enjoying it, but honestly I don't remember anything about it. While this is a sequel to the first book, it is only loosely connected and can be read as a standalone.

Overall, I thought this book was okay. The writing was lovely and there is no doubt that Albom is a great writer. But I just didn't really connect to this one. Probably because every other section recounted some mistake Annie made with the heading "Annie Makes a Mistake". Yes, I realize that was the whole point of her learning experience, yada yada, but hearing about how much she messed up repeatedly was a bit irritating and didn't make me respect her as a character. I also listened to the audiobook, in which you can't just skim through the boring annoying parts. This may have influenced my reading experience as well.

Aside from that, the book just felt like bad thing after bad thing. As inspirational as it set out to be, it was kind of a downer.

I do want to reread the first one now that I realize how the second connects to it. Not sure if I didn't like this one because my tastes have changed over the years or if this one just didn't live up to the legacy of the first. Either way, this one was just okay to me.

A special thank you to Edelweiss and Harper for an ARC in exchange for an honest review.

Mitch Albom has done it again.  In this delightful sequel to The Five People You Meet in Heaven, we once again meet up with Eddie only this time he is reunited with Annie, the little girl he saved.  This is a story of how we are connected in life and loss.

In The Five People You Meet in Heaven, we meet Eddie, a war veteran that worked at an amusement park as a mechanic.  Eddie died a hero when he saves Annie's life.  Forever scared emotionally and physically (Annie's hand was surgically reattached), Annie's life is forever changed when she endures a life of bullying even though Annie cannot remember what happened to her.  She further struggles when her guilt ridden mother suddenly uproots them and moves away.

Finally finding happiness, as an adult, Annie reconnects with her childhood love Paulo.  The novel opens with the two of them marrying.  Unfortunately their wedding day ends in terrible tragedy and Annie finds herself on her own journey to discover her five people that will show her how her life mattered—one of those people is Eddie.

I can't believe it has been fifteen years since The Five People You Meet in Heaven was published. Fans of the book have always wondered what ever became of Eddie and Annie—this is a testament to an inspiring story when it stays with readers and keeps them wondering.

In true Albom style, this book is full of life lessons and grace.  Whether you are a spiritual person or not, this book will touch you in some way and is a gift.  The lesson that I took away was that every ending is also a beginning, sometimes we are simply just unwilling to see it as such. 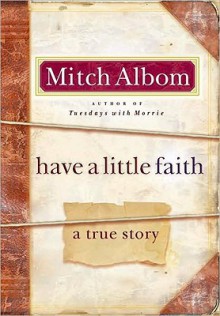 I knew that I would be crying by the time I finished this novel, it was the way that the author introduced his characters and the subject matter. I was certain just by those first few chapters, that a few things were definitely going to occur while reading this novel. I knew that I wouldn’t be able to put down this novel until I had finished it, tears would definitely be falling sometime while I read, and I knew that there would be times when I would have to stop reading and just reflect on the words that I had just read. This book definitely got me, Mitch spoke my language and I knew exactly what he was saying.
Mitch introduces us to two individuals: Reb and Henry. Reb was Mitch’s only rabbi. Mitch was a religious individual growing up. It wasn’t until he graduated college did he let God take a backseat. He felt as a sportswriter that he didn’t need anything from God and he didn’t have time for him so he parked God off to the side. When Mitch went back home, he went to his childhood church with his parents. He remembers Reb as being an exceptional man, one who made everyone feel special. Mitch said that when they listened to his sermon, “honestly, you exhaled when he finished, that’s how good he was.” As a child, I remember listening to individuals, behind the pulpit, who had this type of effect on me. The more that Mitch talked about Reb, the more I could remember having some of the same experiences growing up.
On one particular visit home, Reb asks Mitch to do his eulogy upon his death. Mitch hasn’t been around Reb in 25 years so after contemplating the idea, Mitch decides he will but he wants to know the entire Reb, not just the religious side.
Mitch spends time with Reb, visiting him in a variety of circumstances. This brings about stories, questions, laughs and other issues that otherwise might not have been discussed. Reb is worried about his second death and whether he will have one. Mitch sees the man, the rabbi, the individual that everyone looks up to, he realizes who the Reb really is. There was this peacefulness poise as this relationship transpired and as his eulogy was spoken, it was spoken from the heart.
Mitch meets Pastor Henry and I felt the Reb within him. Henry has had a difficult past. Religion has been a part of Henry’s life only when Henry wants it to be and when he chooses to listen to God’s responses, when he calls out to him for help. Now, a pastor of a crumbly church, Henry has a positive attitude and a nonexistent cash flow. Henry opens his church and home to the homeless and anyone who needs the churches assistance. The building just houses the people and it’s the people who God cares about, is what keeps Henry moving forward as his building falls apart around him. Mitch listens to his powerful sermons as water buckets catch the drips falling from the ceiling. Mitch writes about Pastor Henry and his viewers respond. I didn’t expect miracles from what Mitch had written and I didn’t want their lives to be changed overnight. Individuals responded honestly and heartedly. I was happy for anything that would help this struggling congregation get upright. Henry was giving of himself for his church and his ministry and he was pleased with how others responded to their need.
I cried, I really cried as I found myself drawn into this novel. It truly moved me. he ending was not how I expected but that is life. There was a lot to like about this novel. It truly was a great novel.
Like Reblog Comment
show activity (+) 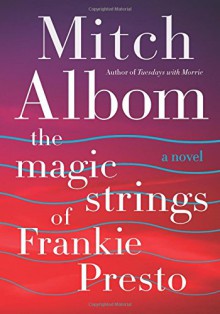 Music himself narrates this book. We learn that music visits newborns and tempts them to grab a bit of talent--or even a lot of talent. Frankie grabbed enough to be the best guitar player on the planet. He amazed everyone. Played with a lot of bands. Got famous. Got rich. But he was forever haunted about his past, the fact he knew nothing about his parents. This is a story told in flashbacks. I liked Frankie, though I suppose if he lived next door where he practiced his guitar 24/7, he would drive me nuts. He sacrifices a lot for his music, too much, perhaps, so there's heartbreak in this story along with love.

"All humans are musical. Why else would the Lord give you a beating heart?"

Since the dawn of time, people have used music for everything: a cry for battle; a victory after a battle; to sooth a crying baby; to uplift ones spirit; to showcase how much one loves another and so on and so forth. Music always has meaning. Even if it's just the sound of someone plucking an old guitar, there is meaning behind what we hear.

And to Frankie Presto, sound means more than what we hear.

Frankie Presto is a huge successful musician. Well, he was. Frankie just passed away in a weird unexplained death onstage at a concert. Interviews at the funeral of his friends, family and acquaintances about how they met Frankie and what part in their lives was touched by Frankie himself or of his music. Many believed that Frankie just had that touch. That gift of sliding from one note to the next with such fluid motion that only a few guitar players have.

What if it was more than that?

What if it wasn't just him playing the guitar?

What if the reason you are so touched by this, it's because there is more at play here than just one man?

Presto and how he became the person everyone loved.