Log in with Facebook
or
Wrong email address or username
Sign up
Already on BookLikes? Log in!
Incorrect verification code
Please, check your email, the code to access your BookLikes blog was sent to you already.
Enter code:
« Back Send
back to top
Search tags: Overwatch

Recently a new hero was released in Overwatch and due to the fact that this is a competitive game you need to know the abilities of a hero who will stand by or against you. So here, I will tell you about the main abilities of the Sigma and explain how they work or how they could be utilized to gain the most benefits from them, like every booster at https://expertboosting.com.

This is a primary weapon of the Sigma, he is firing two projectiles that will detonate shortly after the launch, slightly pulling enemies toward the center of an explosion. The very detonation could look like a mini version of the Orisa's Halt! ability, but with the insanely decreased effect.

The very ability is interesting and the damage of projectiles is relatively high for a tank champion, but the main flow of these projectiles is that you cannot headshot enemies with them, leaving you without the ability to quickly delete enemies if your aim is on the god-level. In the closed spaces it could be used with the insane efficiency, projectiles are bouncing off the obstacles and with enough practice you will learn how to launch them over barriers or corners, dealing damage to multiple enemies with the explosions.

Always use the implosion effect to slightly slow the mobile heroes like Soldier 76, Genji, Tracer, or Lucio. Always give calls to your allies because you will not be able to quickly kill these targets, especially if you are new to this hero and do not know the projectile's speed and gravitation effect on them.

The common barrier that is something between Reinhardt's Shield and Orisa's deployable barrier. Sigma is putting an Experimental Barrier at the range he needed and he could dismiss it at any moment he needs. The barrier's HP pool is 1500 and it does not regenerate while it is placed on the ground, but as soon as you will dismiss it will regenerate with the 175 points per second.

This ability could be in many situations to save yourself or the whole team, you need to respond quickly to any situation possible, so if you are new to the tank role you need to practice a lot. Use the advantage of the high durability shield to block ultimates of such dangerous enemies like Soldier 76, Reaper, McCree, Bastion, Pharah, Reinhardt, Ashe, and Roadhog. If you will use it in the right situation you could easily turn the whole game into your advantage by blocking a key ultimate that was planned as a game-changing.

If you will work together with the Orisa you will create a well known Dual Barrier composition. Learn how to work simultaneously with your partner and your Barrier uptime will be almost 100%. The only thing you need to fear, in this case, is diving compositions and all-in throws.

Kinetic Grasp is an ability that is similar to the Deflect of the Genji or the Defensive Matrix of the D.Va. The range of this ability is not long enough but it is compensated with the width. Sigma could successfully protect allies that are behind and beside him.

Look at this ability more like on an ability that is created to save your teammates not yourself. Or to catch the game-changing ultimates like Graviton Surge or Hanzo's Dragon Arrow. Situational Awareness must be quite high enough for you to let you block all the key abilities. Just imagine how mad Pharah would be if you will soak all the Barrage and her ultimate not only kill anyone but also charge your ultimate at maximum.

Accretion is an alternative fire of the Sigma, he throws a huge ball into the enemy, stunning them and knocking back. The most important thing that Accretion could not be stopped by anything besides the physical barriers. So Genji mains would be wondered with that rock that is flying in their face and why it would not be deflected.

This is the best ability to disable flanking heroes like D.Va or Wrecking ball, leaving them without any chance of retreating. But for the first time, it is extremely hard to land it successfully.

Do not forget that this is considered as a CC ability so you could easily use it to interrupt channeled ultimates like McCree's or Roadhog's (the list is much wider, I am just too bored to tell you all the heroes with such ultimates).

I highly recommend you to put a lot of effort into learning this new champion and his alternate fire mode. Accretion is an ability that has a huge skill-gap but it will be used correctly it will bring you a ton of benefits. You could land a long range hit giving 1.5-3 seconds for your team to quickly wipe down the target.

Achieving the highest rank and being in the list of top-players! This is something that every Overwatch player wishes. Sometimes, players need professional support and help to achieve the same. And that is why there is Overwatch competitive boosting service. There are definite advantages of using this service where boosters (expert-players) play on the behalf of players (those have adapted to use the rank boost service) to achieve the highest rank in the game. Unquestionably, such services have become extremely popular. It is important to consider certain factors while choosing the best of the service company to boost the rank in the game. Let us discuss.
·         The Team – The Boosters
Investigate enough until you are satisfied with the fact that the service company or agency you are hiring has a team of highly experienced and expert players or boosters. It is important because boosters are the players who play on your behalf to bring you the desired position in the game.
·         Competitive Prices
Another important factor is to make sure Overwatch boosting services are provided at competitive prices. Never compromise with the guarantee, quality services and the cost of the service.
·        On-time Assistance or 24×7 Customer Support
This factor is essential to consider because the main motive of approaching experts is to have the assistance at any point of time, or whenever you need.
·         Methods of Payment
While choosing a company for Overwatch rank boost service,ensure the company offers secure and safe payment methods. Plus, ensure the company offers payment methods with different options such as payments via credit or debit card and other options.
A platform operating globally to provides assistance to boost Overwatch rank, SR Boosting is serving as an intermediary between players and boosters. The boosters provide reliable assistance to players on all platforms including PC, PS4, and XBOX. Also, there are agents offering 24×7 personal support to ensure players (clients) experience great customer-services. For more information, visit – Srboosting.com.

text 2019-05-23 10:17
Score Higher and Be Among Top Players in Gaming World with Overwatch Rank Boost Service

Want to score higher in the Overwatch game? Want to be in the list of top-players? Sometimes, even after being too close to success, the luck goes hard. Now, it is easier to keep the path of going forward in grip in the gaming world, with Overwatch boosting services. Let us know more about it.

Basically, Overwatch boost is to achieve a higher rank in the game with the help of top-players playing on your behalf. This is a process to gain assured achievement of the desired level in the game. There are companies providing professional assistance to players looking forward to the higher rank. Players who find themselves unable to achieve what they want can hire most skilled and experienced players to play the game on their behalf. They get support from top-ranked players in the online gaming world. There are certain advantages of hiring Overwatch rank boost players for a game account. Boosters (professional top and experienced players) boost-up the rank from the lowest level to the highest. They understand and know the strategies and apply all moves to boost the rank in the game without any losses.

So, if you are feeling trapped at a certain level and unable to get to the solution, do not give up! Do not be disappointed! You only need to approach reliable and professional Overwatch competitive boosting firms like SR Boosting which have a team of expert-players (boosters) who will come to your rescue and take you out from this ordeal! They will guarantee to lead you to reach up to the desired level. Plus, you will be having complete control over the game, account and can keep everything in privacy. Team of expert-players helps clients to boost rank in the game at an affordable cost. They provide personal support. There are agents available to support you 24×7. 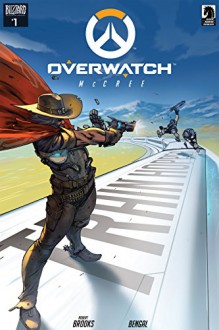 I'm reviewing the whole ten issue series.  It is currently free on Kindle and Comixology.  I think it is always free.

The series is about the characters from the video game of the same name.  I have not played the video game.  The series actually pretty cool.  At least three of the issues (5, 7,8) are linked pretty closely.  There are many women who are strong and who of color.  The science fiction aspects are cool.  The story telling is great, for instance in issue 4 you are not only reading a character study via action story, but also have a look at how to solve or deal with slums.

Honesty, these are very short comics, but awesome.