Log in with Facebook
or
Wrong email address or username
Sign up
Already on BookLikes? Log in!
Incorrect verification code
Please, check your email, the code to access your BookLikes blog was sent to you already.
Enter code:
« Back Send
back to top
Search tags: Robin-D-Owens 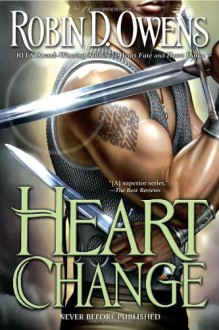 As long as I don't think too hard about how fast the romance has progressed, I like it. Lonely heroine who thinks she's doomed to have everyone she loves leave her, hero who wants a place where he's needed and welcomed. But yeah, it really doesn't make sense that they've fallen all over each other so fast, even considering that they'd met a few times prior to this book. It only took maybe a day for the kissing and heated looks to start.

The non-romance storyline is nice because it ties in with an overarching series plotline that I'd thought Owens might save for the end of the series, although a quick Goodreads check indicates that it's going to take another 8 books for Vinni and Avellana to be old enough to star in their own book. I'm not sure how I feel about a romance novel starring characters that were first introduced in the series as children.

Actual frequent on-page dialogue! It's a breath of fresh air after The Saga of Tanya the Evil.

That said, I've just been smacked in the face by one of the problems with this series, its unintentional cheese factor. Noble families have sentient homes, with the AI housed in a place known as the HouseHeart (edit: I just realized that some of this info might be wrong, since the HouseHeart has a female voice but the public area has a male voice, huh). They're protected rooms, so there are special ways to open them. The Marigold family HouseHeart can be accessed by...tap dancing. This is taken utterly seriously. There are traditional shoes, stored in a special cubby.

I chose this for my "author whose first or last name begins with a letter in LOVE" book. I was going to read Heart Journey but was checking the series order, and of the two books I own in this series that I haven't yet read, this one came first. Although the romances in these are self-contained, they do tend to reference lots of events and characters in previous books, so I figured it would be better to read them more in order.

That said, I'm flat out skipping Book 7, Heart Fate, the one with the 23-year-old guy and 17-year-old girl who was married to an abusive man when she was only 14. That's just a no from me.

Heart Change has been in my collection long enough to develop some sun damage from my terrible book storage practices. I don't recall ever being all that invested in this book's main characters when they were side characters in other books, so I'm guessing this will end up on my offload pile when I'm done.