Log in with Facebook
or
Wrong email address or username
Sign up
Already on BookLikes? Log in!
Incorrect verification code
Please, check your email, the code to access your BookLikes blog was sent to you already.
Enter code:
« Back Send
back to top
Search tags: UnSouled 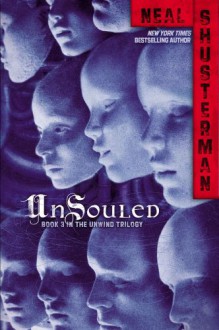 Third out of four book series digs deeper into the capitalism, convenience, and corrupt corporations angles of this incredibly well-developed dystopia. Deeply disturbing, largely because of just how plausible it is. Still some hope for the main cast to chase, but there's no backing down on exposing the selfishness and willful blindness of humanity either. Doesn't overdo it with caricature-like saints of heroes either. Shusterman has a genius for weaving together several viewpoints and plot threads into an explosive crescendo of a conclusion, so I'm definitely looking forward to the big wrap up.

Wow. Another amazing book in the series. I don't want to give anything away, so I'm just going to say that I continue to love this series and the narrator on the audio.

The following book trailer is AMAZING, but just so you know, it could give spoilers if you haven't read the first two books. It was directed by Jarrod Shusterman.

Am I the only one who thinks that the covers of this series are terrible? The books are wickedly entertaining, but the covers are just . . . ick.

Anyway, in UnSouled, the characters’ sanctuary is destroyed, and they are once again separated and on the run. They know that an organization called Proactive Citizenry is the major driving force behind unwinding, but they aren’t exactly sure what this organization does or who controls it. As Connor, Lev, and Risa work to bring down the organization from the outside, they come face-to-face with Cam, who is trying to bring it down from the inside. But, can Cam be trusted? Meanwhile, Starkey and his band of teenagers are waging a terroristic war on unwinding camps around the country, but is Starkey helping the cause or hurting it?

I liked this book more than the second one but less than the first one. That seems to be an unpopular opinion because a lot of people say that this book is their least favorite. I feel like UnSouled moves the story forward and develops the characters a lot more than UnWholly. Most of the main characters are becoming less impulsive and less naïve. They’re learning to harness their anger and turn it into something productive.

“Cowards hide . . . but warriors lie and wait . . . the only difference is whether you're motivated by fear or purpose.” - UnSouled

Cam, the “rewound” boy, is the wildcard in this book. The reader can never be sure what he will do (or what Proactive Citizenry will do to him). I feel bad for Cam. He’s still trying to figure out what he is, why he exists, and whether or not he should exist. He’s being bought and sold like property and doesn’t have much say in what happens to him. I love that his defiant, snarky nature comes out in this book. He’s a troubled teen who’s made from bits of other troubled teens, so you know that this whole Cam situation is going to end badly for someone.

My favorite parts of the book are the arguments between Connor and Cam. Both characters are so intelligent that their fights are hilarious. Neal Shusterman can definitely write some awesome dialogue:

“‘Talking about someone in the third person is rude,’ Cam tells her coolly.

“‘Really?’ says Connor. ‘When you're a hundred people, wouldn't third person be a compliment?’” - UnSouled

I’m going to read the next book in the series, but there are a few things that I didn’t like about this one. First, typos. My copy of the book has enough typos that I got distracted. Whenever I find a typo in a book, I sit there and stare at it because I’m neurotic and think I can make it go away by glaring angrily.

The next thing is probably my fault: I didn’t read book #1.5. I actually didn’t know that there was a book 1.5 until I was partway through book #3. It turns out that 1.5 is kind of important. I wasn’t confused while reading UnSouled because the author does a nice job of bringing the reader up to speed, but I still feel like I missed a pretty large chunk of the story.

My biggest complaint about this book is Risa. The rabid fans of this series on Goodreads seem to love her, but I don’t get her at all. At this point in the series, she has several boys in love with her. Both whole boys and pieces of boys. (I’m counting the boy-brain-bits that make up Cam as “boys.”) I know that this book wouldn’t be a YA dystopia without an old-fashioned love triangle (or love mob?), but I don’t get the appeal of Risa. I think she’s the least-developed of the main characters. She’s kind of a nonentity in the series so far. She serves as motivation for the boys, but she doesn’t really do anything on her own to move the plot forward. Other than being a love interest, I don’t know why she exists. I wish she had a more-important role in the story.

The best part of this series is still the questions that it raises. The series is definitely a product of modern times. UnSouled focuses a lot on terrorism. It shows that terrorists are created when society makes a group of people feel unwanted and ignored. Those people see terrorism as a way to get the world to listen, even if their actions create more problems than solutions.

Like the other books in this series, I got through this one quickly. If unputdownable was a word, this series would be the definition. I’ve been neglecting life to read these books.

Ah, Shusterman. This COULD have been 5 stars, but alas. You messed it up. Congratulations. First problem: love triangle. Seriously? I just wanna say that I did NOT sign up for this. Second, Grace does not feel low-cortical at all. Other than the fact that people describe her as vague, she's the smartest friggin' person in the whole group! And it's not even like an autistic savant or anything. She's just smart, so don't make her low-cortical! But despite those two problems, you still get 4 stars. Why? Because I can't imagine rating this trilogy anything lower than 4 stars. Duh. But also, the ending. Proactive Citizenry is so smart. Funding both ads promoting unwinding of teens AND ads against unwinding of teens but for unwinding of adults? Goshdarn it, PC. Also, I honestly didn't know what Sonia and Janson's device would be, but that was smart. I never said Shusterman was bad at plot twists!