Log in with Facebook
or
Wrong email address or username
Sign up
Already on BookLikes? Log in!
Incorrect verification code
Please, check your email, the code to access your BookLikes blog was sent to you already.
Enter code:
« Back Send
back to top
Search tags: hostile-aliens 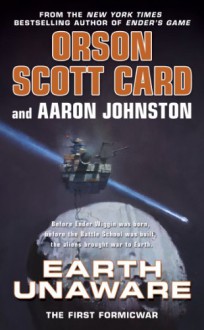 Earth’s denizens have been moving off Earth and onto mining ships to mine metals and minerals from asteroids out past Pluto.  The mining ship El Cavador has spotted something on their ‘eye’ or telescope that is approaching Earth’s system and fast. It could be a comet or some such thing, but since when does a comet slow as it approaches a system? That’s the worrying thing. However, when a corporate ship captained by Lem Jukes bumps them from their claim on an asteroid El Cavador forgets about the incoming object in their attempt to survive the damage to their ship. The destruction and death that is about to happen rests squarely on the corporate ship. If they hadn’t been greedy and bumped El Cavador then they would have had much more warning about the danger bearing down on them.

Meanwhile, back on Earth, Captain Wit O’Toole is recruiting for the multinational MOPs (Mobile Operations Police), taking only the best of the best. Their motto is “Prepare for any situation.” After seeing some really good faked alien invasion footage on the internet, Wit decides that an alien invasion falls under ‘any situation’, so he gets his men training. Let the First Formic War begin.

This is the first time we’ve listened to an audio with more than one narrator and it’s a hit. Everyone loves the narration of this audiobook, but they especially love the narrator who does Wit’s voice (though he also does a few others).

Everyone also agrees that the beginning was slow and boring. They didn’t like all the whining Victor did about Alejandra having to go to another ship because they seemed to be getting a little to close for being cousins. However, once Lem bumps El Cavador the action picks up until the end.

Also in agreement is their opinion that Wit is an awesome character with mad skillz and that he was pretty smart and not crazy for training his men to fight an alien invasion. They can’t wait to see the MOPs kick some alien ass in the next book.

They believe Victor was pretty brave to take a quickship to Luna base. A & T said they aren’t ever leaving Earth (me either for that matter), but K said he’d go to outer space in a heartbeat. Well, he does love astronomy, so I shouldn’t be surprised. The 7 month trip in the quickship lead to the discussion of bone loss and zero gravity vs bone density and gravity. I hope I explained it right. We were in the car and I had no Google to consult. lol

All-in-all a great sci-fi book. The kids are looking forward to listening to Book 2, Earth Afire.