Log in with Facebook
or
Wrong email address or username
Sign up
Already on BookLikes? Log in!
Incorrect verification code
Please, check your email, the code to access your BookLikes blog was sent to you already.
Enter code:
« Back Send
back to top
Search tags: kidlit Stewart and Ashley have some sharp edges when We Are All Made of Molecules begins.

This is fitting for the straight-lines and squares and rectangles (or, should that be hexagons and octagons? no spoilers here!) they inhabit when readers meet them.

But the contents swell and those edges are smoothed until they settle into a suitably Susin-Nielsen-esque ending: satisfying but not saccharine.

Susin Nielsen designs a freak flag like nobody else: bold and proud. Nuthin' half-mast about it.

[But because her works intersect, they are best enjoyed in the order in which they were published, beginning with Word Nerd, which might be my favourite, but I really can't choose one.]

I go on and on and on about how much I enjoy her writing here, on BuriedInPrint. Sarah Ellis' Outside In is her seventeenth novel for young readers, and readers who discover her through this unusual work will undoubtedly be keen to investigate her backlist.

The cover captures the hint of mystery which lurks beneath the story, for Lynn encounters Blossom and immediately questions present themselves.

"Either this extremely ordinary-looking person in a school uniform was a nutbar, or the world had become like one of those fantasy trilogies that Shakti liked to read and which were Lynn’s least favourite books. Maybe this person was a glurb and she had an amulet that had to be restored to the true Druid princess or some such, and wouldn’t it just be Lynn’s luck if it turns out by some horrible cosmic joke that the world was really like that. She would have to go and lie down in the tundra somewhere and just give up."

There are some humourous touches like that, too, as Lynn tries to make sense of what she is seeing. And, along the way, some social commentary. How does one define real in a world which is dominated by the virtual?

"Did Blossom and her family really exist? Lynn experienced a wave of doubt as she glanced around before running her key across the metal screen at the edge of the reservoir. No Phone. No email. No street address. Did Blossom even have a last name? For Pete’s sake, it would be easier to confirm that Celia’s guinea pigs, stars of their own YouTube movies, existed."

Blossom doesn't leave a trail behind her which is easy for Lynn to spot and contemporary readers will face the same challenges following her breadcrumbs. Is she a fantastic creature of sorts? Or does she just live her life in a way which seems fantastic to onlookers living in a mainstream existence complete with pets on YouTube?

"We reorder things. We collect recycling and take it back to where it is useful. We pull up weeds and put them in the compost where they turn into dirt to grow more things. And something we just fancy things up."

These are not fantastic concepts to be sure. But there is some complex thinking behind these everyday save-the-Earth aspects of the story.

"“The game’s not worth the candle.”
“What does that mean?”
“It’s from card games from long ago. The chances of winning are not worth the cost of burning a candle to light the game.”

And along the way, a number of valuable issues are raised. Out of context, these quotes could suggest that the book is preachy, but that's not the case.

“But there are so many things in the world already. Did you know that there is a billion square feet of self-storage in America? That’s a billion square feet of stuff that nobody is using. There are already enough things without making new ones. We can just use what we’ve got. Fix it and use it. All this racing around earning and shopping and saving. It’s all just dancing for doughnuts.”

There is perhaps an overly-wholesome feel to some of the story's language ('nutbar' and 'for Pete's sake' hearken to the 1950s kids' books I grew up reading) but the talk of candles and games is embedded solidly in story.

As an introduction to this critically acclaimed author's works, it is an impressive ambassador.

This review originally appeared on BuriedInPrint. For a book that's only about seventy pages--with fairly huge print to boot--I was quite surprised how creepy this managed to be! With a "Scholastic Guided Reading Level" of M, it's intended for second graders, and if I'd read it at that age, I definitely would have loved it. Of course, the story is super simple and the extremely sudden ending is a bit disappointing... but it's several leagues better than I was expecting, making The Haunted Playground a pleasant surprise.

If you have a young child (four to eight, depending on their reading proficiency) who enjoys scary stories, I'd recommend giving this one a chance. 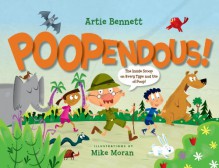 I received a copy of this picture book free from the author in exchange for an honest review.

Continuing in the trend of Belches, Burps, and Farts--Oh My! and The Butt Book by Artie Bennet isPoopendous!, a book that tackles an even less "acceptable" subject than gas or butts: excrement. Fictional Professor Pip Poopdeck guides the reader through the book's "putrid and shocking and horrid" subject in hopes of teaching that excrement is more than just the thing that humans hide out of sight in a septic tank (or porta-potty, latrine, etcetera).

There's an "everybody poops" element here as the good Professor talks about how--you guessed it--everyone and almost everything (at least as far as animals a toddler knows about goes) does it, teaching some more unique words for specific types of excrement (guano, dung, flyspecks) and talking about characteristics of some of the more unusual types of animal droppings (wombats cubes, wet bird poop). And once that's out of the way, the book moves on to discussing--in rhyme, of course--how dung is used around the world and in the animal kingdom. It talks about dung beetles (how could it not?) and fertilizer, endozoochory and territorial marking via scat, and how the Mongolians and Masai use dung in their construction, as well as some of humanity's sillier uses for poop.

Essentially, it's a frank but funny look at poop that attempts to utilize most children's love of potty humor as an opportunity to learn. I'd say it does a good job of normalizing the subject and manages to avoid making it seem too gross, though I wouldn't be surprised to hear that some parents/teachers comfortable with Belches, Burps, and Farts--Oh My! and The Butt Book might still have some trouble with the idea of reading an entire book about poop.

On the other hand, the three books come together to make an amusing trilogy of educational potty humor, each revolving around the rear in some capacity. I definitely recommend checking out all of them if you think they're the type of thing you and your children/students might be interested in (or you have already read/enjoyed one of them); personally, I'd start with Butt before moving on to Belches and then Poop, but that's just me.

I'm going to be on the lookout for more humorous edutainment books like this in the future, so if you have any recommendations, feel free to let me know below!
Artie Bennett eARC humor kidlit picture book
Source: aftanith.blogspot.com/2014/09/book-review-poopendous-by-artie-bennett.html
Like Reblog Comment I received a copy of this picture book free from the author in exchange for an honest review.

The Butt Book was absolutely adorable. If you happened to read my review of Belches, Burps, and Farts--Oh My! by the same author, this book is much in the same vein as that. Both are humorous, education books about topics that might be a bit taboo in a lot of families, schools, or other environments but provide easy giggles to youngsters around picture book age.

The Butt Book was every bit as good as Belches, Burps, and Farts--Oh My!, quickly rolling through a lot of information--from some global words for "butt" to a brief look at some interesting animal butts to the various human uses for the butt (kid-friendly, of course!)--with cute rhymes and some wacky drawings (I'm particularly fond of the picture of an absolutely deadpan, disinterested bald eagle with the most hilariously overemphasized butt--it's amazing). As with Belches, Burps, and Farts, I imagine kids are going to giggle their way through this and pick up some fun facts along the way. And I doubt they're going to forget what they learned any time soon.

I definitely recommend this to any parent looking for a fun but educational read for their children or students, and I'd say that it's a great idea to read it in conjunction with Belches, Burps, and Farts--Oh My!. They make a surprisingly great set, and I'm thinking I'm going to need to keep an eye out for more of this style of educational picture book. They're quite fun to read--totally the kind of thing I would've loved as a kid--and I'd love to be able to at some point create and share a list of recommended "edutainment" books. In the meantime, I'll be reading Bennett's Poopendous!next; hopefully it's just as good.
Artie Bennett eARC humor kidlit picture book
Source: aftanith.blogspot.com/2014/09/book-review-butt-book-by-artie-bennett.html
More posts
Your Dashboard view:
All Reviews Text Photo Quote Video URL Activities
Liked posts Top Tags
Press About Terms of Services Privacy Policy Contact Us Blog FAQ Patronaty medialne BookLikes for Authors Partners panel more...
Team Themes Docs API Blogs
Copyright © 2021 BookLikes