Log in with Facebook
or
Wrong email address or username
Sign up
Already on BookLikes? Log in!
Incorrect verification code
Please, check your email, the code to access your BookLikes blog was sent to you already.
Enter code:
« Back Send
back to top
Search tags: lust-killer 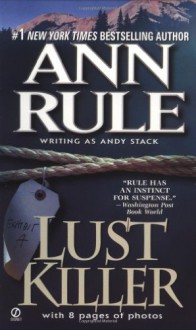 Not too much to say about this besides it's disturbing to get into the head of convicted serial killer Jerome Brudos. I think that the Mindhunter series included him in season 1. Shudder.

"Lust Killer" follows Brudos who murdered several women and had the state of Oregon in a panic in the late 60s. Rule wrote this as Andy Stack, but it still reads as Rule to me. She starts with the murder of one victim, and then works backwards into Brudos' life and hatred of his mother. And surprisingly we find out that he gets married and even has children while still kidnapping women, raping them, and murdering them.

Rule then goes into the lives of the detectives on the hunt for him, we get into more details of the victims, and then of course how Brudos is captured.

What surprised me and what I didn't know is that a neighbor of Brudos wife lied on her (she did lie) and said she was helping him abduct women. The poor woman had to go on trial and defend herself. I liked how Rule gives this woman (living under a different name at the time of the book's publication in 1981) a voice in this book. She was young and naive and wanted to get away from her dominant father, and then married an equally dominant man who she didn't understand, but did scare her.

There are some photos included of Brudos, the detectives, and victims.

I love Ann Rule. There is a reason she is considered the queen of True Crime writing. Although the writing style is a bit different than what I'm used to, this is also one of her earlier efforts, and it's nice to see how her writing has progressed over the years. As always she brings the victims and the killer to life, making them seem equally human. Despite Jerry Burdos's violent acts, he never comes off as inhuman - rather Rule gives us his childhood history of neglect and rejection from his mother, as well as a history of mental illness which was never properly treated. A lot of factors go into creating a serial killer, but these two things combined undoubtedly gave him a good push in that direction. Also, girls, come forward about any sexual assault - your story may lead to stopping a predator before he progresses to something much worse.