Log in with Facebook
or
Wrong email address or username
Sign up
Already on BookLikes? Log in!
Incorrect verification code
Please, check your email, the code to access your BookLikes blog was sent to you already.
Enter code:
« Back Send
back to top
Search tags: nevertoofar 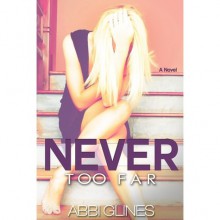 This is the second book in a series, spoilers will be present.

I went into this book with no expectations as I disliked the first one. For most of the book, it followed exactly what I thought it would....immature characters who can't seem to get over themselves.

Blaire seems to have a knack for running away whenever anything becomes slightly complicated. I've never seen the 'strong and independent' female that had to deal with the death of two important people in her life and the disappearance of the only parent figure she had left. She's completely impulsive and that's not a good characteristic to have because she is -you guessed it!- PREGNANT,

I figured it was only a matter of time before Ms. Glines puled some sort of card that made the characters seem  that they were meant to be and what would be better than to add a baby to the mix? The only issue is that both of the parents are extremely irresponsible and Rush...well he can only seem to think about one thing at a time. Whether that is Nan or Blaire, he can't seem to even GOLF without stalking his girlfriend.

I DID,however,like that Blaire finally got over herself and realized that the baby is as big a part of Rush's life as it will be hers. She can't go on and NOT tell him until she's about to disappear. Ugh. These books.