Log in with Facebook
or
Wrong email address or username
Sign up
Already on BookLikes? Log in!
Incorrect verification code
Please, check your email, the code to access your BookLikes blog was sent to you already.
Enter code:
« Back Send
back to top
Search tags: reading-while-snowed-in 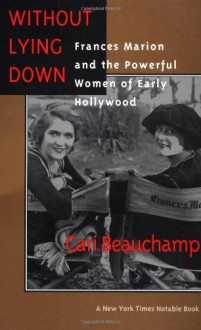 We had a heads up it'd be bad today and so stayed home from work - but I didn't really think it'd be snowing ALL day. (Remember, I'm the person who's not lived in a place with snow for decades now. I've lived in Kansas and Massachusetts, but you grow out of practice with snow and stuff.) So I'm about to leave the computer and go back to where I spent my morning - snuggled up with a book under a blanket, with the curtain open so I can see the snow fall and appreciate what I'm not going to walk through outdoors. Also I have several Cadbury Creme Eggs. Am very pleased about this.

I'm assured that all of this doesn't mean we can't make it out of our area and in to work tomorrow, but I feel skeptical.

Have been hopping from this book about Frances Marion to various Le Fanu ghost stories. Ghost stories just go with snow somehow - if I had a fireplace with a fire they'd be perfect. But Marion - well, I'm quickly becoming a fangirl. She's very focused on pursuing her writing in a field that's new to her, and doing it by herself. Not to mention being divorced twice by her mid twenties.

In 1915 she participated in the march for suffrage parade in NYC - historical background:

PBS This Day in History

(Both links have photos of the parade. Though not of the hecklers - it was not always a safe thing to take part in these, and in some cases there was violence. And the police weren't necessarily going to help out.)

p. 55: "Francis and friends like Adela Rogers had marched in parades before, yet they nursed a nagging suspicion that women were "trading superiority for equality." Women had been voting in California since 1911 and it seemed such an "obvious right" it was almost insulting to have to convince others."

It's always good to remember that no matter the state of women's rights there were always times when practical women would ask "is this really necessary - it's clear we're capable." Also that, in the early days everyone still clung to the idea that "women are special" (the whole putting the gender on a pedestal, sacredness of motherhood, etc.) and that that attitude could be a positive. (Nope, for the most part it tended to be used to argue that women should stick to "their world" - meaning wife/mother/housekeeping.)

I also forgot the whole part about many states allowing women to vote in regional elections long before the national law passed. Which reminds me I have a paper book on women's suffrage I've been meaning to read. Meanwhile this book on Marion mentions SO many interesting women in the arts - and as usual I'm noticing  a lot of them don't have their own biographies. Not that I'd have time to read them all, of course.

Ok, off to my blanket and Cadbury eggs!