Log in with Facebook
or
Wrong email address or username
Sign up
Already on BookLikes? Log in!
Incorrect verification code
Please, check your email, the code to access your BookLikes blog was sent to you already.
Enter code:
« Back Send
back to top
Search tags: religion-pagan-and-animism 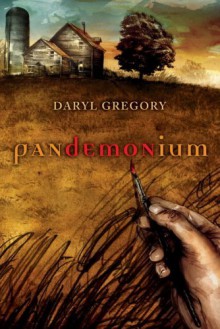 Imagine Herman Hesse and Theodore Sturgeon eating acid with Philip K. Dick then spending the whole day reading classic comics while watching Bill Moyers interviewing Joseph Campbell. That's the impression I got from this book; it's a self-confessed pop culture mashup with a thin veneer of Jungian psychobabble plastered over the top. This could have gone either way; in the hands of a less confident or skilled author this story would quickly become a parody of itself and lose respect from any decently read reader.

Fortunately this was not the case. Nobody tried to reach too far nor did the story try to pretend it's more than just a contemporary adult fantasy novel. It's crafted well, the editing/proofreading are all of the standard you'd exepct from Del Rey, the characters have enough life to be interesting and stand on their own while the setting just sort of drifts by and occaisonally interjects itself to complicate the plot on cue. There's not a lot of action in this book, which makes this the sort of book I don't normally read. I felt the pacing was brisk but too tightly managed. There were very few surprises and I never felt compelled to try to prognosticate what was going to happen next. I'm not even sure I ever got emotionally invested in the protagonist, actually. I felt like I was reading an inventory of a lot of conversations that some guy was having with a number of different people with the purpose of deciding if I like the guy or not. And I'm still not sure I like the guy.

That being said, the story has a new twist on a premise that's been touched on in any number of books and movies (some of them mentioned by name, thank you dear author) and faith in the premise is what kept me going despite the occasional plot hole or the contemporary setting full of characters who can travel back and forth across the US at will but don't have cell phones.

There's nothing technically wrong with this book; it's certainly better than most of the swill getting published under the contemporary fantasy banner. It's a great premise that's executed well, the author clearly respects me as a reader and I feel a kinship since we clearly count some of the same writers among our favorites, but ultimately this story lacks a certain frisson and failed to grab me. I think this is a great book for someone else, and could easily be five stars for a different reader. I found myself skimming the last third hoping there would be a surprise that would engage me (there wasn't), but I liked it just a little too much to give up on it. I'm giving this a very solid 3.5 stars.