Log in with Facebook
or
Wrong email address or username
Sign up
Already on BookLikes? Log in!
Incorrect verification code
Please, check your email, the code to access your BookLikes blog was sent to you already.
Enter code:
« Back Send
back to top
Search tags: sos-group-bookshelf-bingo-r13 Just starting for shelf call of "Paranormal Suspense.". Our team's first four-in-a-row while most other teams have multiple 4-in-a-rows.

New to me author, random library find after spending more hours perusing the shelf than I'll spend reading the book.

Shelf is potential BINGO for another team who still needs to finish their other four shelves -- but, past xperienced says those reviews roll in pretty immediately once a winning shekf is called.  Only one team it's a win for, so no race.

Half my my teammates want to continue, one didn't check in at shelf call ...

I hate suspense genre.  Enough that had I noticed it was a shelf choice this round I might have skipped. I understand why friends' reviews for this one are all over the place.

This one took a turn back to the opening chapters of the series where M.C. was badass out to accomplish stuff rather than moping about pretty dresses and love triangles and being under abusive control of powerful male (the villain king). Loved that. But quickly devolved with her Aunt Maeve putting her under control of another male pretty much back into apprentice role even though now it was learning magic instead of assassin skills and once more full of angst and another court's politics. Yuck.

Eventually worked back out of that (very last chapter) and she's once more on the move towards the end goal of freeing N.'s folk and destroying King and demons.

In the meantime, one POV switch after another after another after another. A few paragraphs of one POV eerily reminiscent of the scene from The Dark Griffin - K.J. Taylor  book where escapes chains could get interesting. POV switches put reader inside various character's heads -- but instead of interesting was just leading up to a rather stupid red herring bit. You know, every chapter in a character's POV had all but one potentially going to betray the prince willingly or unwillingly except for one POV ever so sweetly clearly on prince's side then *bam* of course was suddenly the one found out to be conspiring with enemy but somehow was never in their thoughts chapter after chapter.

Seriously—while I still like the story and the characters and will read on to find out what happens next—this whole book could have been the opening couple of chapters for the next book with M.C. briefed on the POV switch stuff.

★★★★★ = All Time Favorite
★★★★½ = Extraordinary Book. Really Loved It.
★★★★☆ = Loved It.
★★★½☆ = Really Liked.
★★★☆☆ = Liked.
★★½☆☆ = Liked parts; parts only okay. Would read more by author.
★★☆☆☆ = Average.   Okay.
★½☆☆☆ = Disliked or meh? but kept me reading in hopes would get better.
★☆☆☆☆ = Loathed It. Possibly DNF and a torturous read.
½☆☆☆☆ = So vile was a DNF or should have been. Cannot imagine anyone liking.  (Might also be just an "uploaded" word spew or collection that should not be dignified by calling itself a "published book." If author is going batshit crazy in the blogosphere over reviews -- I now know why they are getting bad reviews.  Or maybe author should take remedial classes for language written in until basic concepts like using sentences sink in. Is author even old enough to sign a publishing contract or do they need a legal guardian to sign for them?)

Meaning on that goodreads shelf, not necessarily my favorite series.

It's a just off hold library book that fit the shelf so can't ignore it.

But approaching with trepidation because I just finished another YA book, liked book 1 but got annoyed by book 2, and reviewers whose tastes I usually share are all over the place about it.

*sigh* we keep collecting three in a rows with the majority of other teams having at least one four in a row.

Called. but not stamped, at time originally posted are "UF" "Sci-fi romance" and "Hunter"; yes, other teams have 4 in-a-row already: 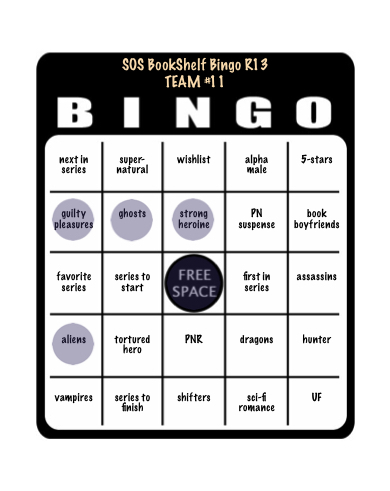