Log in with Facebook
or
Wrong email address or username
Sign up
Already on BookLikes? Log in!
Incorrect verification code
Please, check your email, the code to access your BookLikes blog was sent to you already.
Enter code:
« Back Send
back to top
Search tags: the-rest-of-the-story 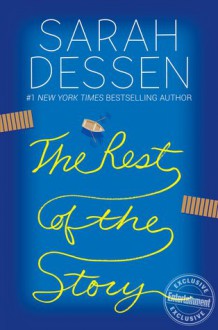 Normally I love Sarah Dessen books. I have loads of them and usually devour them in a couple of days. A new Dessen book is an autobuy for me, I’d already pre ordered and wasn’t actually expecting to get approved for the review copy but I did.

Sad to say though I really did not enjoy this book at all. It felt very poor in comparison to the others I’ve read. The story was slow paced, I felt like the characters had no depth to them. The only character who got a backstory or any insight into was the main character, and even she was about as interesting as dry toast. Everything else felt like cardboard.

Generally I love how characters in these type of books come somewhere for the summer where there’s a family connection and hidden secrets and stories the main character never knew emerges and she discovers things about herself and what she wants for her own future and grows as a person. I didn’t get a sense of that from this book at all. There’s also usually a great family dynamic as well. Didn’t feel that either.

So very disappointed with this one.

Thank you to Netgalley and Harper Collins UK, Children’s for approving my request to view the title.

Wow. What a great book by Dessen. I do enjoy her Young Adult books though the last couple I have read have been misses with me. This one is expertly written, but some things as the time line shifting back and forth and the mess with Saylor's father prevented me from giving it five stars. I really enjoyed this one and hope that we see more from characters that she introduced to us in this one.

"The Rest of the Story" follows 17 year old Emma Saylor. Emma is excited that her father has remarried to Tracy. Her father and stepmother are off to do a Greek sailing trip for their honeymoon. The plan is Emma will stay with her best friend and her family for the summer. However, Emma's friend has a family emergency that sends them to Ohio and Emma no longer has a place to stay. Emma's grandmother suggest that Emma goes and stays with her mother's family in North Lake. Emma doesn't really remember her mother's family and though has some reservations about it, suggest it to her father so that he doesn't cancel his honeymoon. Going to North Lake has Emma finding out more about her mother and her childhood. She also meets and becomes closer to her cousins and to a teenage boy named Roo who she originally met when they were small.

Emma does find that North Lake is broken into two different worlds. The world of the rich and yacht boys and the townies who live there year round who want glimpses of that other world. She finds out that her father was a yacht boy and her mother was not and wonders if that is what led to things splitting apart the way they did.

I really loved Emma. She's a thoughtful teen who due to her mother's past (she was a drug and alcoholic addict) doesn't drink or do anything that can cause her father to stress about her. She has some lovely memories of her mother and misses her, but realizes how terrible it had to be that her father was forced to be a single father from when she was a small girl. Though Emma lost her mother 5 years before the story is set, we quickly find out that her family is rich and she hasn't worked before. Meeting her mother's mother and staying at the family hotel has Emma wanting to do more than just and relax. Her learning to clean rooms along with her pregnant cousin cracked me up at times. It also reminded me how much I loathed being a maid back in the day.

Emma and Roo's friendship was great to witness. They get each other almost immediately and everything in this story-line was sweet.

The other characters like Bailey, Jack, etc. were very well developed. I also loved how Emma's best friends back at Lakeview were still checking on her and how close the group of three girls were to each other.

The biggest annoyance I had with this book though was with Emma's father. You can say that him being married to a drug and alcoholic addict who died could make him cautious. But the way he acted anytime Emma didn't want to do something and forcing her to do things she hated (like sailing) and being dismissive at times towards his new wife did not feel me with warm fuzzies. I don't think Dessen meant to write him this way, but I had a lot of problems with him talking over her and telling her that she was going to do something just because he wanted to. I think he was set up to show a contrast between how he handled things and how Roo was with Emma. Still though I would have brained the guy. And I hated how Dessen "resolved" things. I wish that Emma had pushed more with him and her grandmother. The guy needed to go see a therapist or something. Got to wonder how things will go down if Emma moves away.

The writing was good, but I had some issues with how sometimes Dessen would jump back and forth in her writing. I would be reading and thinking it was taking place in Emma's present, and then we would jump back to a few weeks ago and somehow be back in the present or future. It drove me up the wall. A few times I went, wait how many weeks has it been?

The flow was good though even with the timeline stuff.

The setting of her books being moved to North Lake makes me wonder if she will focus on this location in future books. It was nice to move away from Lakeview and see a different world.

The ending was pitch perfect and I loved how Emma found out more about her mother and came to peace with that. Her finding out more about that side of her family and realizing that she wasn't alone like she originally thought was great too.

Some references to prior people in the Lakeview books as I call them. I really like Emma otherwise known as Saylor. She has a great relationship with her father and is happy that he has re-married. Emma had plans to spend time with her best friend and her family while her father was off on his honeymoon. Her plans change though when her best friend has a family emergency having her in Ohio for the summer. Emma's grandmother suggests her dead mother's family. And now we have Emma back in her mother's hometown and learning more about her. 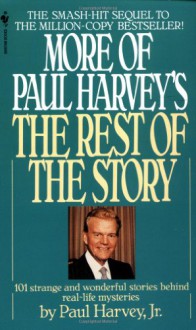 I ran across this old thing in our neighborhood book exchange and I've had fun working my way through these short pieces from the old radio program. Beginning in 7th grade I had to start riding the bus to school. Our bus driver always had the radio set to Paul Harvey News and Comment, so for me his voice will forever be associated with middle school bus rides. "Paul Harvey...Good Day!" An indelible brain tattoo for sure. When it wasn't news, it was 8-track tapes of the Steve Miller Band, so I also know exactly when to clap my hands in that there "story 'bout Billie Jo and Bobbie Sue." How the driver got away with having an 8-track player on the bus is a mystery, but it was a different era, a different world.
More posts
Your Dashboard view:
All Reviews Text Photo Quote Video URL Activities
Liked posts Top Tags
Press About Terms of Services Privacy Policy Contact Us Blog FAQ Patronaty medialne BookLikes for Authors Partners panel more...
Team Themes Docs API Blogs
Copyright © 2021 BookLikes