Log in with Facebook
or
Wrong email address or username
Sign up
Already on BookLikes? Log in!
Incorrect verification code
Please, check your email, the code to access your BookLikes blog was sent to you already.
Enter code:
« Back Send
back to top
Search tags: the-silver-linings-playbook I've finished my "pick it for me" read (Jane Doe by Victoria Helen Stone)!!!  What a winner it was, thank you, everyone, for picking such an awesome read.  I managed to dodge all the snakes and hit two ladders.  I actually got lucky, what'da you know about that. 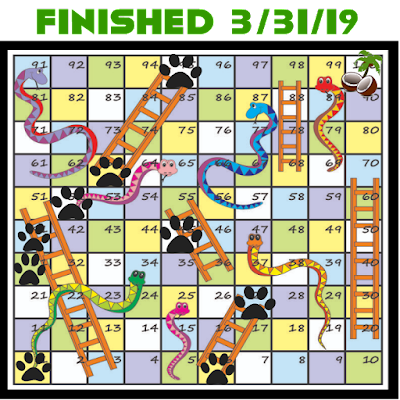 My Stops along the way...

#41~ Prompt:  Characters Involved in Politics...I read The Long Game by Jennifer Lynn Barnes (Finished 03/08/19) which has all sorts of political intrigue...so I rolled two dice and got 4 and moved to

#52~ Prompt:  Has a tree or flower on the cover...I read The Gone World by Tom Sweterlitsch (Finished 03/16/18) because it has several trees on the cover...so I rolled two dice and got 11 and moved to

This was a fun challenge, and I read some books that I really liked, one of the reasons I love Reading Challenges...they force me to read books that I might not have never gotten around to reading or find new ones to fit a challenge.

With Audio Performed by Ray Potter

I wasn't going to read/listen to this, at least not until Audible offered it for free around Christmas.  Since I've already seen the movie (but found myself not remembering too much about it) I didn't really know if I wanted to even listen to this...but a reading challenge (Snakes & Ladders) gave me the push to finally do so.  It's wasn't too difficult to get into this, despite the numerous football references and shenanigans, I still liked the story overall.  I've never really gotten into reading any classic literature and the varied references to them in this were insightful and helped to reassure me that I probably not missing out. This has been the year of the audiobook for me. I believe I've listened to more of them this year than ever before. And boy, this year brought two of my favorite authors to life through the power of voice. Let's get on with it, shall we? (Oh, and click the cover to see my original review!)

1. My number one audio of the year, (and indeed, of ALL time) is Blackwater. Written by the fabulous Michael McDowell and performed by Matt Godfrey, this epic tale spans generations of the Caskey family and their matriarch, who may or may not be altogether human. The star of this show is McDowell's writing-he brings his sharp wit and his knowledge of family dynamics to the table and then Matt Godfrey brings it all home. Blackwater clocks out at just over 30 hours of listening, and I was never, ever bored.

The Lesser Dead written and performed by Christopher Buehlman

2. Christopher Buehlman was unknown to me at the beginning of 2017. Now, in December, I count him among my favorite authors. I've read or listened to ALL of his novels since April, starting with Those Across the River and ending with The Lesser Dead. Mr. Buehlman narrates The Lesser Dead himself and in most cases, I don't think that's wise. In this case, he knocked it out of the park. I later learned that he performs at Renaissance Fairs, sometimes as a storyteller and sometimes as a professional insultor. Perhaps his experiences with performing has honed his voicing skills because this book was KILLER. After I finished listening, I "rewound" it, so to speak, and listened to the last chapter again. Oh my goodness, oh so killer!

Born to Run written and narrated by The Boss

3. I'm not a big fan of Bruce Springsteen, but I'm a bigger fan since I listened to his memoir. I have always been a fan of his songwriting abilities and it seems that that skill transferred well to writing this book. I'm sure a true Springsteen fan would get even more out of this book than I did, but I sure did love listening to that husky voice relate how he got started, learned to dance, (to pick up women), and how he struggled to get and keep a band, not to mention a marriage, together.

Between Two Fires by Christopher Buehlman, narrated by Steve West

4. Between Two Fires by Christopher Buehlman, narrated by Steve West was totally and completely INSANE! Some truly scary scenes were depicted in this story and thanks to the vivid writing and expressive voicing, I can still picture them clearly in my head.

The Memory of Running, written and performed by Ron McClarty

5. The Memory of Running, written and narrated by Ron McClarty. I got turned on to Ron McClarty because he narrated Empire Falls by Richard Russo. Then, when I looked for additional performances by him I discovered The Memory of Running. From what I gather, it was originally available only as an audio book which Stephen King highly recommended. Eventually it became available in paper form as well. Anyway, Mr. McClarty used to play a recurring judge on Law & Order, but writing and narrating is most definitely his forte. I loved this weird tale of memories, acceptance and bicycling across the United States.

Nightmares and Geezenstacks by Fredric Brown, narrated by Matt Godfrey

6. A thoroughly entertaining collection of short stories, some of them super short, but all of them a lot of fun. For the most part, I prefer reading short stories rather than listening to them, but Matt Godfrey's talent made me change my mind about that.

You Will Know Me by Megan Abbott, narrated by Lauren Fortgang

7. Competitive teenage girls are just about the scariest monsters out there, and I know scary!

Behind Her Eyes by Sarah Pinborough, narrated by cast

8. The book everyone was talking about at the beginning of the year! Usually, I avoid those like the plague. However, the audio was available at the library, so I decided to give it a go. I vividly remember listening to this while I was cleaning and then, for the last half hour or so, I just sat on the sofa, stunned.

9. Audible was giving this one away for free, so what did I have to lose? I loved the movie, but as usual, the book was a little different. That said, I loved the book too!

10. This book came to me highly recommended by a fellow reader. Even though a book about small town life with no evil children or haunted houses is really not my thing, Empire Falls MADE IT my thing. I've since listened to two more audiobooks of Richard Russo's work, (Everybody's Fool and Nobody's Fool), and I tracked down McClarty's Memory of Running, (see above.) Now, I just need to track down the HBO series of this FANTASTIC novel.

This year I've learned the following:

Ron McClarty and Matt Godfrey can both narrate the hell out of any story, and I will happily listen to them perform their grocery lists.

Authors sometimes CAN perform their own stories and do it better than anyone else.

I've finally accepted that audiobooks are an acceptable form of reading and I look forward to finding new narrators and discovering new worlds to listen to in 2018.

Thanks for reading if you've stayed this far! I hope you'll join me in enjoying audiobooks in 2018!

Thanks to Audible for offering this audiobook free, way back when. I finally got around to listening to it and I loved it. It even made me tear up at the end. It's very different from the movie, but excellent in its own right.