Log in with Facebook
or
Wrong email address or username
Sign up
Already on BookLikes? Log in!
Incorrect verification code
Please, check your email, the code to access your BookLikes blog was sent to you already.
Enter code:
« Back Send
back to top
Search tags: warlock-holmes 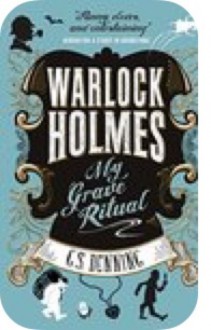 I truly love this series.  It is so brilliant.

And, I  most admit, I don't think I can ever read the physical copies of the book because Robert Garson performance is so wonderful.

This installment includes the appearance of Irene Adler. I judge Sherlock Holmes incarnations by how Adler is done.  Sherlock lost me with what they did.  Elementary was far better.  Denning's Adler is a damn fine Adler that the chances of Doyle liking are rather high.

Unlike the other two, this third installment ends on more of a cliffhanger (more because part of the conceit is the potential end of the world).  But that's fine.

It's still a great ride.  Wonderful fun with Holmes at the expense of the other Victorians.  Those wonderful asides, Watson's common sense, and the fun word play are all here.  There is more development on the idea of the Nine, as well as the introduction of Violet, who is quite awesome.

And let me say, that I really, really want Denning to write a Violet series.

Holmes comes to the fore a bit more in this installment, which was quite enjoyable.  There is even a section while Holmes tells the story, and it was really great. 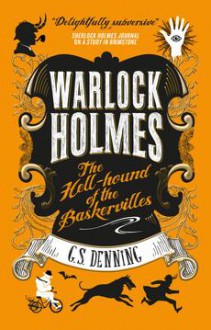 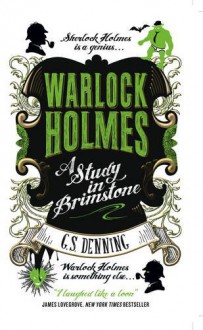 In the vein of some of the re-writings of Sherlock Holmes this is Sherlock as a bit of an idiot, saved by the cleverness of Dr Watson.  This is a set of stories, rather than just one, detailing Watson's introduction to the world that Holmes inhabits (and honestly it's done better in the Lord Darcy series).  There's a vampire, Inspector Vladislav Lestrange and an Ogre and a variety of other characters that I neither cared about or really remember.

It's not terrible but I have absolutely no inclination to read further in this series, it wasn't enough of any of my catnip to really interest and too much of a parody to make me happy with it.  It occasionally came across as trying too hard.

The reader, Robert Garson, did quite a good job of reading it.

If you are doing Halloween Bingo, this book would work for: Spellbound, Supernatural, Relics and Curios, Shifters, and Country House Mystery.  The only reason I am not counting it is because I started the audio before Sept.

Warlock Holmes is part parody/part fantasy rendering of Sherlock Holmes.  Each chapter is based on a Holmes' adventure, and usually includes Watson doing some type of riff about a logical point or Victorian behavoir.  (The whole discussion of the speckled ban is worth the cost of the book).

The difference is that Warlock Holmes is a man of unique talents and isn't quite normal.  He might not be the brightest bulb in the bunch, but he is likable.  His friends in Scotland Yard are also slightly different.

Robert Garson's narrative voice is spot on.  He also doesn't do silly and annoying female voices.

The book does end on a bit of a cliffhanger.  But there is are second and third volumes.

(3.5 stars)
Parody of Sherlock Holmes, the blurb makes you think it will be in a laugh out loud humorous style.

It's done well enough, the author should consider whether he's going for a humorous or a fantasy twist. There are some good touches of both but they never quite gel together.

Doctor Watson proves to be the brains in this operation, but Warlock has his own abilities. The stories are told in a suitably Doyle style, although some Americanisms slip in to the dialogue.