Log in with Facebook
or
Wrong email address or username
Sign up
Already on BookLikes? Log in!
Incorrect verification code
Please, check your email, the code to access your BookLikes blog was sent to you already.
Enter code:
« Back Send
back to top
Search tags: weird-wicked-woods 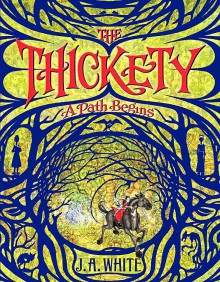 On the same night Karas little brother was born her mother was executed for witchcraft. Now 8 years later the villagers scorns her and calls her "witch girl" and her father has become a wreck.

Kara tries to take care of her sickly brother Taff who she loves she also has a friend,Lucas who is a Cleaner. Cleaners are the lowest in the village and their job is to try and keep back The Thickety.A wood full of weird trees and deadly monsters and all of ruled over by the forest demon Sordyr.

The community where Kara lives ,the Fold is a strict community that closed itself off from the outside world centuries ago.

After a crowlike thing lures her into the Thickety Kara finds a buried book,a grimoire belonging to her mother. She also encounter Sordyr but manages to escape the Thickety just in time.

Kara after a while learns how she can use the grimoire to summon and command any animal she wants and she finds herself using the magic more and more,but when a former friends of her mother warns her that the grimoire is more dangerous than she can understand she tries to stop using it.

At the same time Fende Stone -the man who convicted her mother of witchcraft watches Kara for signs of witchcraft while his daughter Grace who on the surface seems to be very nice and devout girl but hides a manipulative and cruel personality and when she learns of the grimoires existance she decides she wants it and its power for herself.

And what Grace wants she will get...one way or another.

The Thickety is a book wich I did like in its way but that I cant claim to love despite it having many things I do love in a book. First of all its dark,maybe too dark for the demographic its originally aimed at.

Fende Stone was an unpleasant man,but he was nothing when in comparision with Grace.I felt vaguely unclean from reading about her evilness. In her way Grace is used as a foil for Kara,showing her what the grimoire could turn her into.

There is mention of torture of the maincharacter,it does happen offpage but I just felt uncomfortable at the mere thought of a 12 year old girl being physically abused.

When I started to really think about I felt it was trying to deal with too many issues all at once.Obviously trying to cram so many things into the story makes the book take its time to build up to the more meaningful scenes. I was halfway through the book when I realized it felt like the book was stalling.

It was if I may be a bit fanciful like fighting your way through the Woods and then realizing you have been so busy avoiding to get snagged or stepping into a hole but you have barely moved at all.

And then the showdown at the end just comes all at once.

Now that Ive mentioned that I would like to end with some good things.

Kara is a great character.

The plot twist with the book Karas father keeps writing in was pretty neat.

When the Jabenhook ,a character from a story Kara made up for her brother does turn up towards the end part of the book I was like YEAAAAAHHH. 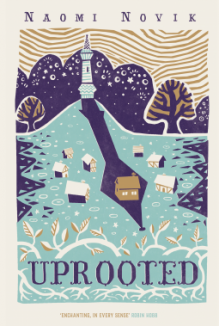 I recieved this ARC from Netgalley and this is my honest Review of this book.

In the kingdom of Polnya the dark and twisted Wood is steadily creeping trying to corrupt more of the land all that keeps it from expanding is the Dragon in his tower.

He is not an actual dragon but a wizard who will take a girl every 10th year away to his tower -to do what no one knows. All the villagers know is that when the young women returns,they are changed and can no longer stay in the village.

Everyone in Dvernik knows he will chose Agniszeiskas friend Kasia. She is the most beautiful and gifted in so many ways. Not like akward Agniszieska who is always tearing her clothes or getting her hair tangled.

So it comes as a shock when at the ceremony Kasia is not chosen-but Agniszieska is.

The Dragon is very brusque with her once she arrives at his tower but as time passes she starts to gain an understanding of him and learns that his purpose for bringing her and the other girls to his tower.

In fact it might change her whole life.For better or worse.

I have to admit that I have never read Naomi Noviks Temeraire series before. So this is my first experience reading this authors work

If I would have to describe this book it would be as Pygmalion ( My Fair Lady but I just love Pygmalion more. It has Leslie Howard.enough said) in medievalish times with magic.

The setting is the kingdom Polnya wich I at first thought as merely a made up land but the mentions of zupan and letnik made me realize that it was reminscient to Poland so I started to think of it as an alternate universe of Poland where magic exists.

There are some niggling things I have to mention that I felt could have been improved on.

Certain characters like Agnszieszkas family well I just wish we had seen more of them more show and less telling would have been preferable.

There were moments when Agniszieska would wonder something to herself,that is in her mind and in the next the Dragon would answer her. I felt it distubed the flow of the scene,like there was a gap or I had missed something.

The Dragon sees magic as something precise like a perfect mechanism or clockwork while Niszheska sees it as a living and changing thing.

The Dragon is a grumpy and oftentimes rude man but at least he is honest. Though truth be told sometimes I wanted Niszekha to slap him.

As for our heroine...Niszeska is very relatable. She might have trouble keeping tidy and but she means well and while she advances quickly in her magic powers she never turns into that dreaded thing:the Mary Sue.

She reminded me of Rhea from "The Seventh Bride" by T.Kingfisher.

When it comes to romances in books there is a plot I dislike immensely and that is the teacher-student as its usually an unequal one so I appreciated that Agniazieska was not very subservient to the Dragon Oh she might have been intimitated by him but she has a will of her own and if anyone instigates things its her.

But I have to say if I had gone in to this expecting a huge sweeping romance I would have been disappointed.There are no "I love you-s" altough there is a sex scene.

Altough that scene at the ending was very moving in its subtle way.

The blurb of the book mentions that its like a Grimm fairytale and I agree that its Grimm..but its also very Grim. The woods is such a creepy place It infects people with its dark magic in horrific ways.

And a fair warning its a bloody book. I am talking Game of Thrones the tvseries bloody.

When they went into the woods I was on the edge of my seat.Thats a good thing for a book.

There are two covers for this book and while the old cover is good and the golden rose on that cover is not a pretty cover thingy but something from the book I will have to say the new one is amazing in its colorful simplicity.The tower looming over the village and casting a shadow on the one house really captures the feeling of the book.

So in the end. This is a good book and if you are in the mood for a dark fairytale with a good dose of female empowerment this is the one for you.