Log in with Facebook
or
Wrong email address or username
Sign up
Already on BookLikes? Log in!
Incorrect verification code
Please, check your email, the code to access your BookLikes blog was sent to you already.
Enter code:
« Back Send
back to top
Search tags: wrong The Right Side of Wrong by Prescott Lane


Lane takes the term heartbreaker to heart. Paige and Slade bleed the heart dry with their haunting, emotional story of hope and sacrifice. The Right Side of Wrong is a courageous journey of heartache and healing that stays on the mind and upends the heart. Like I do so often, when it comes to non-fiction, I'm going to cheat on the summar part and quote from the official blurb:

These impossibly cheerful essays on the routine horrors of the present era explain everything from the resurgence of measles to the fiasco of the presidency.

In Nothing Is Wrong and Here Is Why, acclaimed Washington Post satirist Alexandra Petri offers perfectly logical, reassuring reasons for everything that has happened in recent American politics that will in no way unsettle your worldview.

In essays both new and adapted from her viral Washington Post columns, Petri reports that the Trump administration is as competent as it is uncorrupted, white supremacy has never been less rampant, and men have been silenced for too long. The “woman card” is a powerful card to play! Q-Anon makes perfect sense! This Panglossian venture into our swampy present offers a virtuosic first draft of history—a parody as surreal and deranged as the Trump administration itself.

I'd say that this is some of the most vicious political satire I've read, but then I remember all the P. J. O'Rourke that I've read. Not to mention Christopher Buckley. Or Jonathan Swift. Or William Langland.... Okay, so maybe I should abandon that idea... I am safe in saying that it's satire from America's political Left that could give ORourke a run for his money (although her pieces are shorter than I remember him able to do, therefore punchier).

I am not a Liberal*, and have problems with a lot of the politics underlying these essays. However, most of these essays don't have particular positions or policy's in their sights. They're primarily focused on personality, corruption, competency and the culture the current administration fosters. So while I'd differ from her on vital points, I was able to find more to agree with in these pages than not.

* Not that there's anything wrong with that.

There were a couple of pieces I was personally offended by, but largely I could write up differences in belief, conviction or understanding to a difference of opinion that are worth discussing—and even when I couldn't I can admit that most of her points would be largely valid from Petri's worldview. But none of that rendered any of these essays unreadable (there were two that came close for me, probably not for many others). In fact, I think there was only one of the 50+ essays that I didn't find a point or two that made me smile or chuckle.

Some pieces work wherever you end up on the political spectrum—like, "You May Already Be Running" (how an elected official finds themselves running for President without deciding to), "Raising Baby Hitler" (rather than using a Time Machine to kill baby Hitler, going back in time to raise him differently). The piece about what she'd call a moderate Republican (I'd consider an actual conservative, not a Trump Republican) looking for someone else to stand up to the President was wonderful and haunting.

I don't recommend reading more than 3-4 a day, I think they'd lose their impact if you went much further (I knocked off six on one day without meaning to, and I regretted it).

This is a refreshing read, it makes you think as well as grin. If you happen to agree with Petri on most of the issues, you'll enjoy it more than others will. But frankly, a funny piece is a funny piece, even if I disagree with some/all of it. And that kept me turning pages. I enjoyed this, I recommend it, it'll unsettle you, it'll make you think, and it might provide a little relief just seeing someone eruditely make the same points you wish you could. 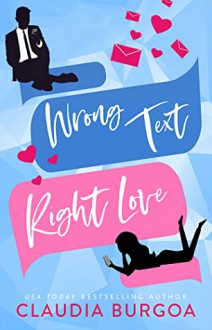 
After seeing how deep her stories can get, it's nice to see the lighter side of Claudia Burgoa. Wrong Text, Right Love puts humor on full display while never losing the heart that Burgoa is known for. I needed a good laugh and Percy and Chad delivered that and so much more.